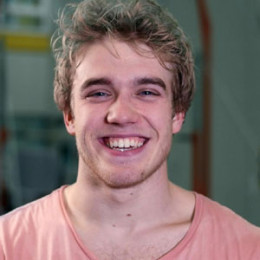 Bobby Lockwood is an English actor best known for his role as Mick Campbell on the TV series entitled House of Anubis. He is also known for portraying Rhydian Morris, a protagonist in CBBC’s supernatural television series Wolfblood since 2012.

The talented actor, Bobby Lockwood was born on May 24, 1993, in Basildon, England. He holds English nationality and belongs to Caucasian ethnicity. His birth sign is Gemini. He has an older brother named James and a younger sister named Abbie.

At the age of 10, he landed his first role in the entertainment industry. From an early age he was interested in acting, so he pursued his further career in the field of acting.

The promising actor started his career at an early age. When he was just 10, he landed his first role in the entertainment industry with a voice acting role in the film, 101 Dalmatians II: Patch’s London Adventure.

Bobby is most known for his role in CBBC’s series entitled Wolfblood which aired in 2012. He also played the role of Mick Campbell in Nickelodeon’s mystery series House of Anubis from 2011 to 2012.

In 2013 Lockwood awarded Best Performer award at the children’s BAFTAs for his performance in Wolfblood. He then went on to play the guest lead role of Sam Langton in ITV’s Inspector Lewis. In 2017 he played the role of Josh in Uncle for BBC3 and Nathan in Unforgotten for ITV.

Lockwood appeared in several movies including Mum’s List where he portrayed the role of Matt and starred opposite Rafe Spall and the role of Laser in Honey 3 which was released in 2016. He wanted Johnny Depp to appear in at least one episode of the Wolfblood. In the past, he has also appeared in Sainsbury’s supermarket adverts.

The young actor started dating Ana Mulvoy-Ten his co-star from House of Anubis in 2010. Ana is one year older than Bobby. They both were engaged on August 4, 2013, but they ended the engagement the next year.

Before dating Ana, he dated Tasie Lawrence, his co-star from House of Anubis. Currently, he is single and is still unmarried.

As Bobby is the young actor in the film industry, he has not appeared in numerous movies. But his net worth is reported to be more than $2 million.