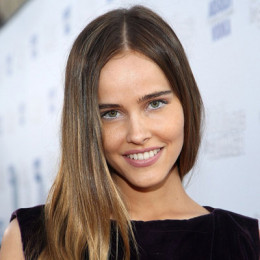 Isabel Lucas grew up in Queensland and also lived in Switzerland for some time. She was born to a teacher mother named Beatrice and a pilot father named Andrew. She is fluent in 3 different languages and can communicate in five. She studied at the Victorian College of Arts, and was in the drama team. She was discovered by her current agent Sharron Meissner, who was very impressed by her beauty and talent. She started with some Australian TV shows, and then was featured in movies.

Lucas is most probably single at present. She, however, dated a couple of guys in the past.

Previously, she dated Chris Hemsworth from 2005-2008. They first met on the set of long-running drama Home And Away. After breaking up with Chris, she started a romance with Adrian Grenier.

Talking with The Daily Telegraph in August 2018, she stated that she's so happy with his life. She is currently living in Byron Bay and often travels back to Los Angeles for her work. Byron Bay is also the home of her ex-boyfriend Chris Hemsworth.

Isabel Lucas was born on 29 January 1985 in Melbourne, Australia.

In 2017, she played in That's Not Me and Chasing Comets the next year.