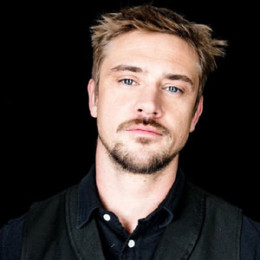 Boyd Holbrook was born Robert Boyd Holbrook on September 1, 1981, in Prestonsburg, Kentucky, USA. He is the son of Ellen and Don Holbrook. Holbrook is American by nationality and belongs to the White ethnicity. He studied acting at a special acting program, William Esper Studio's Meisner Acting Program for two years. He graduated from New York University and received an SCPS Certificate in 16mm film.

Boyd Holbrook was first discovered in "Jenny Wiley Theater" in Kentucky where he was working as a part-time carpenter. His unofficial modeling career began right then. In 2001, he signed a contract with Elite Models and later got the chance to work for Wilhelmina Models.

As a model, Boyd Holbrook has worked with many popular and renowned designers and labels like Gucci, Jean Paul Gaultier, Versus, Hugo Boss, Bill Blass, Calvin Klein, Moschino, Marc Jacobs and DSquared.

Boyd Holbrook made his first onscreen performance through a music video "Allison" of band Permanent Me.

Boyd Holbrook's career took a major turning point when he sent a screenplay to the director Gus Van Sant, in 2007 and he was really impressed with his performance. This led him to bag a role in his first feature film Milk as Denton Smith.

Following the success of the movie, he worked in drama series, "The Beautiful Life" and "The Unusual", along with several guest appearances in shows like "Tough Trade" and "Hatfields & McCoys."

In 2012, Holbrook won Hamptons International Film Festival for his work on The Host. Some of his screen credits include The Reunion, The Magic of Belle Isle, The Host, Out of the Furnace, Very Good Girls, Gone Girl, Morgan, Logan, Tough Trade, Behind the Candelabra and others.

Holbrook rose to fame after casting in the Netflix's original series, Narcos. The series is the biopic of renowned drug lord criminal Pablo Escobar, and Holbrook has been the lead part of the show since its first season that aired in 2015. He shared the screen with Wagnor Moura, Pedro Pascal, Andre Mattos and so on.

Boyd Holbrook has also worked as a photographer and has collaborated with professional photographer, David Armstrong. He is a sculptor and exhibited his first art show, "Iscariot" in a RARE gallery in Chelsea.

Holbrook is all set with his upcoming venture, The Predator which would be scheduled to release on August 3, 2018.

The 37-year-old Boyd Holbrook is in a romantic relationship with his lady love, Tatiana Pajkovic. Tatiana is an actress best known for her role in the movie, Transporter.

The duo first met via the help of mutual friend and after few meetings, they eventually fell in love. The couple is together since 2016 and going strong together ever since.

The pair is expecting their first child together. The paparazzi captured the adorable couple at Los Angeles in September 2017 when they went for a stroll and Pajkovic flaunted her growing baby bump.

Previously, he was engaged to actress, Elizabeth Olsen in December 2015 but after a year they called off their engagement. Olsen dumped Holbrook on the same day he lost his best friends.

Taking his split, he describes the breakup as a divorce,

'On the same day that my best friend died, I got a call from my girl to tell me it was over.'

Later, he dated an actress, Maika Monroe but due to some irreconcilable differences, they split.

Boyd Holbrook is one of the rising Hollywood stars. His estimated net worth hasn't revealed yet but considering his career, we assume it isn't less than the seven-digit figures. In 2008, his feature film, Milk earned $54.6 million at the box office which was made under the budget of $20 million.

Also, he's starring in the Netflix series, Narcos which reportedly has a budget of $25 million for its every season and The Richest ranks it as one of the expensive Netflix series of 2016.

Here's a video of 10 Things You Didn't Know About Boyd Holbrook.