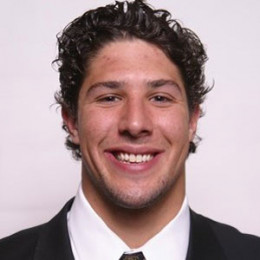 Brendan Peter Schaub, better known as Brendan Schaub, is an American Heavyweight MMA fighter who placed second on The Ultimate Fighter: Heavyweight and was the first heavyweight to finish a UFC match via d’arce choke. Also, he is a podcaster, actor, commentator and former professional football player. Currently, he is in love relationship with Joanna Zanella and with his girlfriend has a baby boy, Tiger Pax Schaub.

Completing higher education, he played football in the Arena Football League with the Utah Blaze and NFL’s Buffalo Bills. Before he began his football career, he used to practice boxing and Jiu-Jitsu (Japanese martial art), as his father was a 2nd-degree black belt in Taekwondo.

During the period, he met UFC heavyweight contender Shane Carwin and became friends as well as training partners. Soon he joined Ultimate Fighting Championship from the team Rashad and defeated players including Demico Rogers, Jon Madsen, and Marcus Jones and reached in the finale. Unfortunately, he lost by KO in the first round to Roy Nelson.

On 23rd October 2010, he made his main credit debut at UFC 121 in Anaheim, California against Gabriel Gonzaga, former UFC heavyweight title challenger, and emerged as the victor of the match. Even he had expressed interest in fighting Frank Mir and Mirko Cro Cop in his next fight.

Furthermore, he continued his boxing, and a fight against Mir was tentatively booked for UFC 128 on 19th March 2011 instead he faced Mirko Cro Cop. He won the Knockout of the Night award with the third-round KO following a well-placed counter-punch and a four-fight win streak.

Brendan's final fight was against Travis Browne which he lost via TKO in the first round on 6th December 2014. His friend and UFC commentator Joe Rogan, after the match publicly advised him that he doubted that Travis could beat the elite fighters of the UFC heavyweight division but also worried about him sustaining more head trauma. On 12th October 2015, he posted on social media that he was retiring from MMA.

After that, he hosted The Fighters and the Kid podcast on FOX Sports along with Bryan Callen. The two toured in the podcast to sold-out crowds on a national tour in 2016 in the venues such as Wilbur Theater of Chicago, Gramercy Theater of New York City, The Wilbur Theater in Boston and culminating at the Comedy Store in Los Angeles.

He made a solo stand-up comedy debut on 10th August 2016 at Comedy Store. The same year, he released The Fighter and the Kid 3D.

Apart from this, he has launched a solo podcast, Big Brown Breakdown and performed the show's first live version podcast on 2nd March 2017 at the Ice House Comedy Club in Pasadena, CA.

Moreover, Bellator MMA announced that he would join the promotion to provide insight and analysis as a part of the show Bellator 180 and the Bellator NTC pay-per-view on 7th June 2017. The show aired on Spike TV on 24th June at Madison Square Garden in New York City.

Talking about Brendan’s personal life, he in love relationship with Jonna Zanella, a TV host, and actress. The boyfriend and girlfriend together became parents for the first time with the birth of Tiger Pax Schaub, on 21st February 2016.

He was previously in a relationship with Ronald Rousey, an American mixed martial artist, judoka and actress from the year 2013 to 2014 and after nearly a year of the love relationship, the couple split.

Brendan is one of the successful boxing players who has earned huge net worth from his career. His source of income includes comedy act, hosting the podcast show, and boxing. He has successfully collected an estimated net worth of $3 million. Currently, he lives in the house situated in Los Angeles, California, U.S.

Born on 21st February 2016, Tiger Pax Schaub is the one only son of Joanna Zanella and Brendan Schaub.