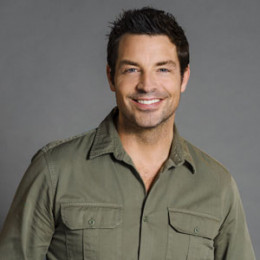 Canadian actor, Brennan Elliott is best known for his role as Dr. Nick Biancavilla in the Lifetime medical drama series, 'Strong Medicine' 2000 to 2004. He is active in the film industry since 1996 and till the date, he worked on numerous movies and TV series. He is a married man and fathered two children.

Brennan Elliott was born on 24th March 1975 in Calgary, Canada. Elliott's father was a bank manager and his mother worked in a finance company.

Elliott attended the prestigious Actors studio at the Julliard Academy in NY. His first screen appearance was in the music video named 'Life is a Highway' a Tom Cochrane's 1991 song.

His most prominent roles are his leading roles in the 1999 movie 'The Silencer and G-Saviour' from 2000. Elliott also acted in the horror film named 'Curse of Chucky' as well as a cameo role in the 2014 film entitled 'Night at the Museum: Secret of the Tomb'.

Elliott also made appearances in the 'Ghost Whisperer' series and has worked in 'Flight 93' as 9/11 hero Todd Beamer.

In 2013, Elliott began starring as Warren Saget on the Hallmark Channel series, 'Cedar Cove'. In 2015, he was cast in the recurring role of reality dating show host Graham 'UnREAL', the Lifetime drama series.

In 2014, he appeared in the movie named 'Night at the Museum: Secret of the Tomb' with  Ben Stiller and Owen Wilson. He starred in the 2016 holiday movie"Love You Like Christmas."

Brennan Elliott has an estimated net worth of $1.7 million, as per some online sources but no official confirmation has come about it.

Elliot is one of the highest-paid Canadian actors and he charged a handsome for his appearance in movies and TV series.

Brennan Elliott married to Cami Elliott in 2011 at an intimate ceremony. The duo first met in the 1990s through the help of a mutual friend. Then they started dating one another and eventually fell in love with one another.

So excited to give my kids a couple of @danicamckellar brilliant math books! Such a sweet gift. Truly touched! It’s Christmas already! That’s a WRAP!!! C u #nov21 for #christmasatgrandvalley @hallmarkchannel #countdowntochristmas

The duo is proud parents of two children, a son, and a daughter. Elliot often posted his wife and kids pictures on his social sites.

Besides, Cami Elliot, Brennan has never linked up with any of his co-stars nor his affair rumors took place.