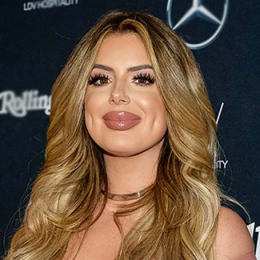 Brielle Biermann is one of the famous American model and reality television star who is popular for their stunning physics and gorgeous face. She caught the limelight after appearing in a television reality show named the Real Housewives of Atlanta. She is a famous model known for modeling at the Micheel Kuluva show during New York Fashion Week in 2013. The 22-years-old reality star is recognized for dating her ex-boyfriend Michael Kopech who is a famous Baseball player.

Personal Life of Brielle Biermann; Is she dating?

Brielle Biermann is possibly single as of now. The well-known reality star seems focused on her career and is never spotted with anyone in the public. Moreover, she is out of any relationships or she already knows the bitter taste of the relationships?

Biermann was first in a relationship with the reality star named Slade Osborne. The duo first met up and started dating in the same year in 2014. They used to share a good bond but after a year, Brielle caught Slade reportedly flirting with other girls and then they decided to separate in 2015.

The 22-years-old reality star then started dating the famous baseball player, Michael Kopech. They started dating from the year 2016 and were together for over two years. But unfortunately, in 2018 the couple parted their ways regarding their personal life.

Brielle was once rumored for dating Chase Chrisley in the April of 2019 when he shared a post with Brielle, cuddling and kissing her on the chick. But, a good friend of Brielle shared that she and Chase are good friends but they are definitely not dating. He/She added;

"He and Brielle are good friends but they're definitely not dating. Brielle is 100 percent single."

Well, with that stunning physics there must be hundreds of people who must have loved her. Besides, it seems like the gorgeous lady is waiting for her soul mate.

What is the Net Worth of Brielle Biermann?

Brielle is an active person on social media and uses Instagram very often. She posts many personal, promotional, and professional posts on the account and manages to earn over $2,651.25-$4,418.75 per post from his account.

As for her modeling career, she modeled at the Micheel Kuluva show during New York Fashion Week in 2013. After that, she also worked in many modeling campaigns for many brands and designers.

feeling beyond blessed today!!! at 20 years old i was able to buy my DREAM car today a Mercedes G Wagon!!! i’m so lucky!! and so thankful!!! thank you mom & dad @kimzolciakbiermann & @kroybiermann for teaching me that you can have whatever you want in life!!

Like other superstars in Hollywood, Brielle is also a car lover and loves to drive luxurious cars. In fact, she owns a black colored Mercedes G Wagon which is also a dream car of her. Furthermore, she bought her dream car at the age of 20 at the market price of $124,500-$147,500.