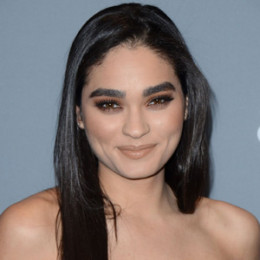 Brittany O’Brien is a young American actress who rose to fame after she portrayed the character of Nadia on The Messengers and Simone on Star. Also, she is seen in the music videos including I Can Be, Break Yo Chest and I Bring Me. Currently, she is dating her boyfriend from her high school but the name of her boyfriend is not revealed in social media.

Brittany O’Brien was born on 2nd June 1996, Arlington, Virginia to Native American parents Mike and Monique. She grew up along with her sibling brother, Mike Jr. She belongs to Caucasian ethnicity. She is experienced in TV, print, commercial, theater, dancing as well as singing too.

She began her career in the very early days and made her acting debut on the American television sitcom, Trophy Wife which was created by Emily Halpern and Sarah Haskins, in 2014. The TV series starred Malin Akerman, Bradley Whitford, Michaela Watkins, Natalie Morales, Ryan Lee, Albert Tsai and so on.

The following year, she made her appearance in two TV series The Night Shift and The Messengers. In The Night Shift, she shared the screen with Eoin Macken, Jill Flint, Ken Leung, Brendan Fehr, Robert Bailey Jr., JR Lemon, Scott Wolf, Freddy Rodriguez and so on. It was aired on May 27th May 2014, on NBC.

Though she made her appearance in few of the TV series, she gained popularity from the American television series The Messenger. The tv show was created by Eoghan O'Donnell which starred Shantel VanSanten, Diogo Morgado, J.D. Pardo, Joel Courtney, Anna Diop and Craig Frank. They have done over 13 episodes in 1 series.

Also, she was praised for her role in the American musical drama television series, Star, created by Lee Daniels and Tom Donaghy in 2016. It is the story about the three young talented singers who navigate the music business on their road to success. The TV series starred Jude Demorest, Ryan Destiny, Quincy Brown, Queen Latifah, and Miss Lawrence.

Apart from acting, she has played some of the music videos including I Can Be, Break Yo Chest and I Bring Me from the TV series, Star which has over 1k viewers in YouTube sites. Moreover, she is the face of Food Stamp Program.

Talking about Britanny’s personal life, she is romantically dating her boyfriend from her high school days. She actively participates in social sites like Instagram and has shared her romantic moment through her Instagram account.

Unfortunately, due to her secretive nature, she has never revealed her boyfriend name in social media. Also, this actress is taking her acting in next level and is waiting for a greater role in her upcoming TV series and movies as well.

Brittany is one of the versatile and rising stars who has received immense popularity in a short period. She has not only gained popularity among the viewers but has received a huge net worth from her acting. As per the sources, she has an estimated net worth of $700 thousand.