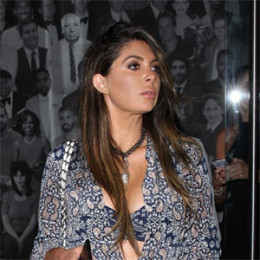 Brittny Gastineau, the 34-year-old American model, is best known for her appearance on, "The Gastineau Girls," E!s "Keeping Up with the Kardashians," "The Hills," and "Cribs." She did her first modeling venture for Stuff Magazine. Gatineau is recognized as the BFF of reality stars, Kim Kardashian.

Born on November 11, 1982, Brittny Gastineau is a daughter of  Lisa Gastineau and former New York Jets defensive end, Mark Gastineau. She grew up in New York City. Her parents had divorced when she was young after which she started living with her grandmother. Her birth name is Brittny Amanda Erin Gastineau.

Gastineau attended the public school at Clarkstown High School North in New York. Later, she graduated from the University of Alabama.

After her graduation, Gastineau moved back to Manhattan to pursue a career in modeling. She first signed with the Elite Model Management and featured in the Stuff magazine. In 2005, she signed an endorsement deal with L'Oreal Paris, and during that period she became the face for designer ED Hardy to promote his casual wear.

The following year, she walked the ramp for Fashion Week in NYC. In her modeling career, she worked with several brands, magazines, and designers including; MAC, Hamptons, Social Life, Ferrari California, Lucire and much more.

Besides modeling, Gastineau has often featured in reality shows also. In 2009, she made her TV debut with E! Network series, The Gastineau Girls which was a modest hit. She appeared in the shows like; Identity, Keeping Up with the Kardashians, The Hills, Cribs.

Brittny Gastineau might be single at the moment, but priorly she was romantically linked to several men. In 2014, she had an affair with Marquis Lewis, started dating in late 2011. The reason behind their break up was their personal differences and continuous fight.

Back in 2010, she dated Olympic swimmer Micheal Phelps. She also had an affair with illusionist David Blaine in 2014, they first met at Kim Kardashian's wedding, but the couple never admitted being in a relationship.

Gastineau is active in modeling since 2005, and during her 12 years long career period she has earned quite an impressive net worth estimated around $4 million. She is paid handsomely for her modeling venture and appearances in TV.