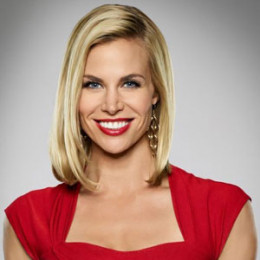 Brooke Burns is an American fashion model, television personality, and actress, well known for her portrayal in supporting character Peg, in a Spanish-American teen sitcom Out of the Blue. Burns married Gavin O'Connor and together have a daughter named Declan Welles

Brooke Burns was born on 16 MArch 1973 in Dallas, Texas. She is the daughter of Brad and Betsy Burns. She also has two sisters.

Brooke did Ballet dancing for 12 years during her childhood and began modeling at the age of fifteen after tearing her anterior cruciate ligament in a skiing accident. When she was sixteen, she along with her family shifted to Europe, later moved to Paris, Milan, and Munich.

From 1998 to 2001, she starred in Baywatch as the character Jessie Owens. In 2001, Burns appeared as Vicki Vale in one of the several 'Batman' commercials for OnStar, opposite Bruce Thomas's Batman.

Burns also portrayed in North Shore, a prime-time soap that ran for 21 episodes in 2004 and 2005. Later in the year 2006, Brooke played in the WB series Pepper Dennis as Kathy Dinkle.

She also made her appearance in a Hallmark Channel Christmas movie, The Most Wonderful Time of The Year, co-starring with Henry Winkler.

Brooke Burns has been married twice. Firstly, she was married to an actor Julian McMahon from 1999-2001, they have a daughter together, Madison Elizabeth McMahon(born in 2000 June).

On 10th November 2005, Brooke broke her neck in a diving accident. Though she made a full recovery, she has a titanium fusion in her neck consisting of a plate, ten screws, and rod.

Brooke Burns earns a huge amount of money from her successful career as a fashion model, television personality, and actress. She has made her appearance in various tv series, advertisements, and movies, which add up to her total net worth of $ 3 million.

Her first husband is Julian McMahon, an actor. They have a child together. The couple divorced after two years.

After few years of her divorce, Brooke Burns married her second husband Gavin O' Connor. Since then they are living a happy life together.

She is the daughter of Brooke Burns and Julian McMahon(first husband), born in 2000, June.

Declan Welles was born to Burns and her second husband Gavin O' Connor, on 22nd Jan 2017.