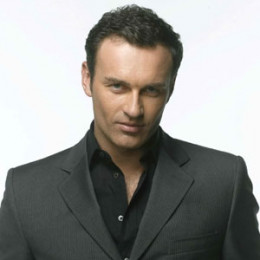 The only son of Sir William McMahon, the former prime minister of Australia, Julian McMahon is an Australian actor and model. He is an accomplished actor who has played in hit movies and TV series such as Fantastic Four Franchise, Nip/Tuck, Chasing Sleep and many others.

Julian began his career as a model in various capitals like Milan, London, New York City, Rome, and Paris. He did commercials for brand Levi Strauss.

Afterward, he was cast in soap opera Home and Away alongside his ex-wife Dannii Minogue. He then appeared in the award winning drama series Nip/Tuck. The series won Golden Globe and an Emmy Award.

Furthermore, McMahon made his appearance in the film Wet and Wild Summer! in 1992. He also appeared in Danni Minogue’s music video This Is It and This Is the Way.

In addition, he starred in NBC’s Profiler followed by WB’s Charmed, and Fantastic Four. In 2007 he featured in thriller Premonition along with Sandra Bullock. In 2011, he co-starred in Faces in the crowd with Milla Jovovich.

The 49-year-old Julian is a married man. He first married Dannii Minogue in 1994. Dannii is the Pop Star and former co-star of Home and Away. The duo eventually divorced in 1995.

McMahon then tied the knot with Brooke Burns in 1999. Brooke is the former star of Baywatch. The couple welcomed their daughter Madison in 2000. In 2001 they finalized their divorce.

In 2014, Julian married his long-time girlfriend Kelly Paniagua. They were engaged for six months prior to their marriage. The lovebirds are blissfully living together.

As an actor and model, Julian certainly makes a lucrative amount from his career. The film Fantastic Four he played in was a box office success. His net worth is certainly in millions.

Danni Minogue is the ex-wife of Julian McMahon. They married in the year 1994 and divorced in 1995.

Brooke Burns is the second ex-wife of Julian McMahon. They married in the year 1999 and separated in 2001.

Kelly Paniagua is the current wife of Julian McMahon. They married in 2014 at Lake Tahoe, California.

Madison is the daughter of Julian McMahon from his wife Brooke Burns. She was born on June 10, 2000.