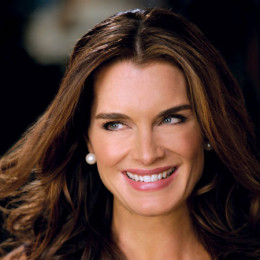 An American actress, model and former child star who is better known for starring on Suddenly Susan. She started her career as model in Ivory Soap when she was just 11 month old.

Brooke Shields is married to screenwriter and producer, Chris Henchy since 2001. The duo first met in 1999 through a mutual friend and soon after started dating. The couple shares two daughters.

Prior to marrying Chris, Brooke was in a marital relationship with tennis player Andre Agassi in 1997. But the couple failed to handle their married life and divorced in 1999.

Brooke Shields' net worth is $25 million and the main source of her income is an actress and model.

Brooke Shields was born on May 31, 1965, in Manhattan, New York, US. She is a daughter to Teri and Francis Alexander Shields.  Her parents got divorced when she was just 5 months old. She holds a bachelor's degree in French literature from Princeton University.

In 1978 when Shields was 12 years old she starred in the role of a child prostitute in Louis Malle's controversial film Pretty Baby. When she turned 16 years old she became famous as a fashion model and controversial child actress. Beside movie, she has also starred in popular shows like That '70s Show and Lipstick Jungle. She is also guest co-anchor of show 9:00 hour which is aired in Today on NBC.

He is the former professional tennis player. They were in marital relationship for only two years. Later she annulled their marriage so that she can again get married in roman catholic church.

Professionally he is an American screenwriter and producer. Together, the couple is blessed with two beautiful daughters.

Shebis the eldest daughter from her second marriage. She is very gorgeous.

She is the youngest daughter. She resembles more like her father. Her picture can be found in different sites.