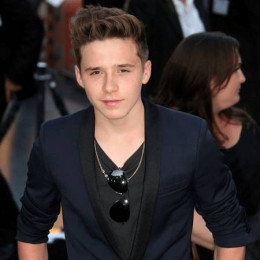 Brooklyn Beckham is eldest son of son of David Beckham and Victoria Beckham who was featured in TV documentaries named The Real Beckham and Victoria Beckham. He is elder among his three siblings named Romeo Beckham, Cruz Beckham and Harper Seven Beckham. His father is a popular English former football player and following his dad's footstep he has already signed professional contract. He is very talented and he has already tried out for the Manchester City where his dad used to be former footballer.

Talking about his personal life he is still young to get married that but that doesn't mean he is single. He current went public with his model girlfriend Hana Cross.

Brooklyn Beckham with his model girlfriend Hana Cross
The above image posted on Valentine's Day 2019 captioned,

"Me and my girl. Luckiest man in the world. Love you baby"

He is smart and handsome for his age and is famous among girls. In his Twitter account, he has followed only six people including his current girlfriend. He lives in Los Angeles with his parents and younger brothers.