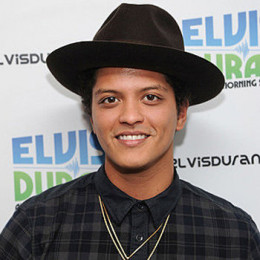 Peter Gene Hernandez, better known by his stage name 'Bruno Mars', is a singer-songwriter, record producer and choreographer. He is widely known for his songs like Nothin' on You, When I Was Your Man, Locked Out of Heaven, Just the Way You Are, Treasure and many more. He is the recipient of 14 awards from ASCAP and two Grammy Awards.

Accounting his personal life, Bruno Mars is in a serious relationship with a gorgeous fashion model and actress, Jessica Caban. The couple met for the first time with the help of their mutual friend.

They are in a relationship since June 2011 and probably the couple is looking forward to getting married soon as they have great bonding and chemistry with one another. Moreover, in 2011, he was rumored of dating Amelle Berrabah and Rocsi Diaz, but later it was found just a hoax.

Bruno Mars has an estimated net worth of $150 million. His major source of income is his music career. He also makes good money from tours and concerts.