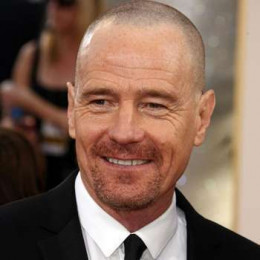 Bryan Lee Cranston is an actor, director, producer, screenwriter and voice actor. He is widely famous for portraying Walter White in the AMC crime drama series Breaking Bad, Hal in the TV series Malcolm in the Middle and Dr. Tim Whatley in the Seinfeld. For his role in Breaking Bad, he won the Primetime Emmy Award four times, 1 Golden Globe Award, 4 Screen Actors Guild Awards, and 4 Satellite Awards. He was born to Audrey Peggy Sell, a radio actress and Joseph Louis Cranston, an actor, and boxer.

Bryan Cranston shares an amazing chemistry with girlfriend turned spouse Robin Dearden. They are married for over three decades now. Let's tale a look at his current relationship status and past affairs.

Cranston dated now present wife, Robin Dearden for nearly 5 years before taking a romantic relationship to the next level. After understanding one another for years, they tied a knot.

Since July 8, 1989, he has been enjoying his second marriage with his beloved wife. Bryan met her on the set of the series Airwolf in 1984.

The two are blessed with a daughter. The couple welcomed a daughter on February 12m 1993. There is no point in talking about the couple's divorce as they seem pretty satisfied and happy with each other's presence.

Prior to Robin Dearden, Bryan walked down the aisle with Mickey Middleton in 1977. They remained in a conjugal relationship for five years. The duo called it quits in 1982 citing irreconcilable differences.

The 63-year-old actor has an estimated net worth of $30 million at present. Bryan shares a screen with elite actors Christopher Cousins and Aaron Paul in the series, Breaking Bad.

Speaking of their salary or earnings, Cranston brings home a cool $225,000 per episode whereas his mate Paul pockets $150,000.

His wife, Robin's net worth is estimated to be $5 million. Bryan's daughter Taylor Cranston possess a net worth of $300 thousand.

Cranston is a philanthropist personality too. He gives away some portion of his income to charities. In April 2014, Bryan hosted at Broadway Cares/ Equity Right AIDS Easter Bonnet Competition with Idina Menzel and Denzel Washington after raising donations at his Broadway show "All the Way".

Cranston is fond of old vintage cars since the beginning. He owns some of Mercedez Benz cars which costs around $26,570 - $99,000. He shares a luxury house with wife Robin in Ventura County, California, the U.S. His 2,450 square feet beach house in California costs more than $1.8 million.

She is the first wife of Cranston, who by profession is a writer. Her actual name is Michaelle Louise Middleton.

She is the second and current wife of Cranston, whom he first met on the set of the show Airwolf in 1984 and since then the two are together.

Actress Taylor is the only child born to Cranston and his wife. She studied Theater at the University of Southern California.