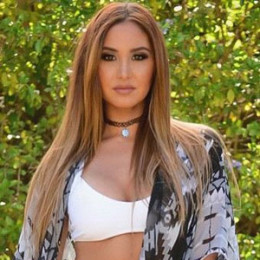 Catherine Paiz is a Candian actress, better known for her role in the movies Lilin's Brood, Monday Nights at Seven, You Can't Have It. She also has her own YouTube Channel, The AEC Familly, with her boyfriend, Austin McBroom, and daughter, Elle.

Catherine Paiz was born on 24ht August 1990, Canada. When she was young, she along with her family moved to the city of California and it is where she grew up. She attended St. Louis College.

After that, she appeared in the romantic drama movie, Monday Night at Seven with stars Andrson Silva, Edward James Olmos, Lorraine Bracco, Pepe Serna and Mary Apick, a movie directed by Marty Sader.

In 2017, she made an appearance in the movie, You Can’t Have It, directed by Andre Gordon. The movie starred Rob Gronkowski, Joanna Krupa, Jillian Murray, Dominique Swain, John Steven Rocha.

Before coming to film industry, she used to work at Arkadia Miami as VIP Manager. Apart from her acting career, she has got her own YouTube channel, The AEC Family, which has over 2 million subscribers. She along with her boyfriend, Austin McBroom is the owner of the channel. Their channel features a lot of funny comedy videos and some prank videos.

Moreover, she is a fitness model and has performed at Victoria Secret.

This beautiful actress, Catherine is in a love relationship with a basketball player, Austin McBroom. The couple has been dating since their college days.

In the year 2015, the boyfriend-girlfriend announced the pregnancy and revealed the news of them being parents. On 28th May 2016, the duo welcomed a baby girl, Elle which completed their happy family.

After the birth of baby girl, the family has uploaded several videos and pictures in the social media accounts including Instagram and YouTube.

Being a social media personality, Catherine has earned huge fan following on social sites. She has over 2 million subscribers on her YouTube channel, The AEC Family and over 1.3 million followers on her Instagram. From the channel, they earn around $275 thousand per year. Altogether, she has an estimated net worth a bit over six figures.

Born on 28th May 2016, Elle is the one only daughter of Catherine Paiz and Austin McBroom. Elle is also a part of YouTube Channel, The AEC Family along with Catherine and Austin.