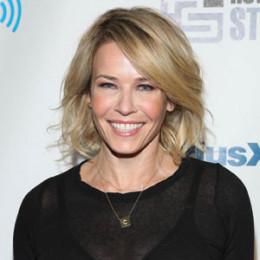 Chelsea Joy Handler, better known as Chelsea Handler, is a famous American comedian actress. She is the host of the late-night talk show Chelsea Lately, Chelsea Does on Netflix and Chelsea. She is also a writer and has published five books that have made the New York Times Best Seller List among which four of the book have reached number one.

Chelsea Handler was born on 25ht February 1975, in Livingston, New Jersey, U.S. to Jewish father Melvin Handler and German mother, Rita Handler. Her father was a car dealer where as her mother was a housewife. She grew along with sisters, Simone and Shoshanna and three brothers, Glen Handler, Ron Handler and Roy Handler.

In 2006, she lost her mother because of breast cancer and at the age of 9, her brother, Chet died in a hiking accident in the Grand Tetons in Wyoming.

Later, she moved to Los Angeles, California from New Jersey in order to pursue his career in acting. There she started working as a waitress.

Chelsea began her career from the Spy TV, an American hidden camera reality television series hosted by Michael Ian Black and Ali Landry, in 2001. The show was broadcasted on NBC in which pranks were pulled on people by their friends but unfortunately, the show was canceled after two seasons. The same year, she portrayed the character of Ann in the TV series, The Plotters.

Soon, she made her appearance in the TV series like The Practice, My Wife and Kids and The Bernie Mac Show. She also played a comedy role in American reality television show, Girls Behaving Badly which aired on Oxygen cable channel.

Later, she became a regular commentator on E!, and Scarborough Country, plus a correspondent on The Tonight Show. She even hosted the show, On the Lot, created by Steven Spielberg and Mark Burnett but after doing one episode, she was replaced by former Robin & Company entertainment anchor, Adrianna Costa.

In 2006, she hosted the show, Chelsea Handler, on E!, where she lasted two seasons and in 2007, she toured with Comedy Central’s Hour Stand-Up Comedy tour across the United states. The tour gained her attention among the viewers. The show was televised on through different channels including VH1’s Love Lounge, Comedy Central’s Premium Blend, and HBO’s broadcast of the Aspen Comedy Festival.

Then she hosted the 2010 MTV Video Music Awards held at Nokia Theater in Los Angeles and became the second woman in the history of the VMAs to be the sole host of the ceremony behind Roseanne Barr.

In 2007, she started her own half-hour, late-night comedy series show, Chelsea Lately, which aired weekly on the E! Network in the U.S., Canada, U.K. Australia, German and New Zealand. The show has done over 1,000 episodes and the final episodes of Chelsea Lately aired on 26th August 2014.

Apart from acting and hosting, she has authored five books entitled My Horizontal Life: A Collection of One-Night Stands in 2005, Are You There, Vodka? It’s Me, Chelsea, in 2008, Chelsea Chelsea Bang Bang in 2010, Lies That Chelsea Handler Told Me in 2011 and the last one is Uganda Be Kidding Me in 2014. All her books have made the New York Times Best Seller List among which four of them have reached number one.

Moreover, she was ranked on the Forbes Celebrity 100 at No. 98 and was listed one of the 100 most influential people in the world on their annual Time 100 list in 2012. She has made her appearance on one of the two covers for the edition of Playboy in December 2009, a cover of Shape in 2010, The Hollywood Reporter in July 2011 and Redbook’s March 2012 issue and on the cover of the September 2012 issue of Marie Claire.

Chelsea has received many awards in her life time. In March 2009, she received Ally for Equality Award from Human Rights Campaign. She also won Bravo A-List Award in 2009 and has received the Comedy Person of the Year Award at Montreal’s Just For Laugh comedy festival in 2012.

Chelsea dated popular American singer and rapper 50 Cent. The duo first met on her talk show Chelsea Lately, but things went wrong after the rapper ex-girlfriend Ciara came on her show. After the incident, 50 Cent called Chelsea to say that Ciara wanted him back and wasn’t happy that she was dating him. Then the couple split.

She then dated Dav Salmoni, a Canadian animal trainer, entertainer and television producers. The couple dated for several months and later Salmoni announced their break up news to the world on The Tonight Show with Jay Leno.

David Alen Grier was her boyfriend in 2005 but unfortunately, after a year, the couple ended their relationship.

In 2006 she had an affair with Ted Harbert, the CEO of Comcast Entertainment Group. But unfortunately, the couple separated after 4 years of long relationship. She confirmed her breakup with Ted via her late night talk show.

In 2011 she met hotelier Ander Balazs and started dating. Like her previous relationship, Chelsea and Balazs broke up after a two-year bi-coastal relationship. Unable to find true love, Chelsea is currently single.

Chelsea is a supporter of Democratic Party and was a vocal supporter of the 2016 presidential candidate Hillary Clinton and was critical of her opponent Donald Trump.

Chelsea is one of the successful TV personality and TV host. She has earned a lucrative amount of net worth from her career which is about $40 million. Currently, she is living in her lavish house in Los Angeles, California.