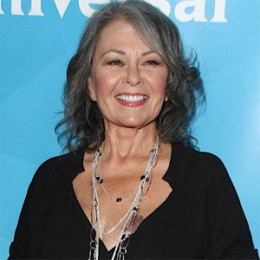 Roseanne Cherrie Barr is an American actress, comedian, writer, television producer, director. She was the 2012 presidential nominee of the California-based Peace and Freedom Party. Barr began her career in stand-up comedy tonight clubs before gaining fame for her role in television sitcom Roseanne, for which she won EMMY and Golden Globes Award. She is the oldest of four children born to Helen, a bookkeeper, and cashier and Jerome Hershel Barr, a salesman.

Barr married Bill Pentland, a motel clerk in 1974. They had three children: Jessica, Jennifer, and Jake. But the couple divorced in 1990. Four days later, Barr married fellow comedian Tom Arnold. Barr met Arnold in 1983 in Minneapolis, where he opened her stand-up comedy. Barr filed for divorce from Tom in 1994 in the Superior Court of Los Angeles Couty for physical abuse and domestic violence. Barr and Tom don’t have any children.

In 1995, Barr married Ben Thomas, her one-time personal security guard, at Caesars Tahoe with a reception at Planer Hollywood. She got pregnant through in-vitro fertilization in 1994 and had a son named Buck. The couple stayed together until 2002. Barr dated Johnny Argent in 2003, whom she met online.

She amassed a net worth of about $80 million as of 2019. The star collects such a huge fortune from his career as an actress.

At the age of six, Barr discovered her public stage by lecturing at LDS churches around Utah and was elected president of a Mormon youth group.

At the age of 16, Barr was hit by a car that left her traumatic brain injury. While institutionalized she had a baby that she gave up for adoption but later reunite. When she was 18, she moved out by informing her parents that she was going to visit her friend but never returned. Her lesbian sister Geraldine Barr and a gay brother Ben Barr inspired her to introduce a gay character in her sitcom.

Just after four days after her divorce from Bill, Roseanne married her fellow comedian Tom Arnold. These two key in1983 where Tom opened fro her stand up comedy act. Barr also bought Tom onto her sitcom as a writer. their effort to have children was unsuccessful.

Roseanne got married third time to her former Ben Thomas who was once her personal security guard at Caesars Tahoe with a reception at Planet Hollywood. Barr became pregnant through in-vitro fertilisation and has a son together named Buck.