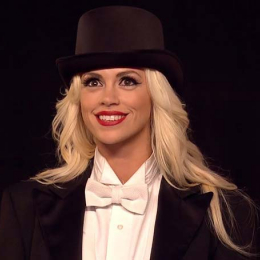 Chole Crawford is one of the aspiring Britsh dancer and magician who is better known for working as magician assistance of the American magician Murray SawChuck. She is also popular as a model of the Playboy Magazine of January 2014. The 30-year-old magician is also recognized for engaging the famous illusionists Colin Cloud.

Personal Life of Chloe Crawford; Is she Married? Know about her Relationships

Chloe Crawford is currently engaged to the famous illusionists Colin Cloud. The duo exchange a ring in February 2019 after dating for a couple of years and fans are eagerly waiting for their big day.

The duo first met at the set of 'The Illusionists: Magic of the Holidays'. Since then they are going stronger and together. Furthermore, the duo gives major relationship goals to their fans and well-wishers.

Chole was previously married to the famous magician Murray SawChuck. The pair shared the wedding vows in 2012 among their close friends and relatives. Initially, they shared a good bond but after staying together for three years they felt some highs and lows in their relationship and decided to split in 2015.

I am so incredibly proud of my love @colincloud & his amazing performance on @agt #thechampions#thehoffreturns He is an inspiration to me & I’m sure many others. He is the most kind, generous & humble person I have ever met! I love you Colin McLeod!

Chole once explained in an interview about what types of men she likes and what she prefers in terms of relationships. She said;

"When it comes to men, I prefer to be in a relationship. When you get comfortable with another person, you get to experiment."

"I love a man who's spontaneous and likes to go on road trips. I'm also really into classic cars -- if you've got a 60's or 70's Corvette, I'm sold. I once had sex on the hood of a Stingray!"

Chole is an active person on social media and loves to shares pictures regarding her personal life and professional life as well. The 30-year-old magician also loves to do dancing and singing. Moreover, she prefers eating sushi and a bar of British chocolate in free time.

How much is the Net Worth of Chloe Crawford? Know about her Career;

Chole started her career by working in the casino production show in Slovenia at the Casino le Perla. She was offered to go on the world tour by the casino which she accepted and ended on performing on both land and sea at the Magic Castle Hollywood, and the Palazzo Manheim in Germany. After that, she moved to Las Vegas and started to work as a lead assistant and choreographer for her former husband and famous magician Murray Sawchuk.

As for Crawfords modeling career, she chose to perform as topless revue in America. She later worked in her first nude shoot for the Playboy magazine in January 2014. Further, she was loved and praised for her work and was even voted for Playboy's Cybergirl of the Month for February 2014.

Chole Crawford in Britain's Got Talent:

Chole Crawford wanted to catch fame and showcase her talent in front of the world, therefore, she decided to participate in Britain's Got Talent in 2015. She appeared in the 5th-week audition of the competition and amazed the Judges with her magic trick. Here take a look at what she did;

The magician managed to reach the semifinals of the competition but unfortunately, after that she was knocked out of the encounter.

Chole was previously married to the famous magician Murray SawChuck. The pair shared the wedding vows in 2012 among their close friends and relatives