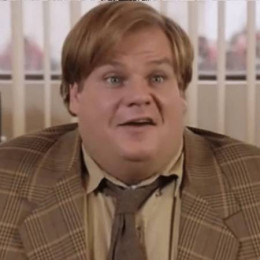 Christopher Crosby Farley was an American comedian as well as an actor. He was known for his loud, energetic and comedic style. He was also a member of Chicago’s Second City Theatre. He had died very young only at the age of 33 because of drug overdose. Tom Farley, his father owned an oil company and Marry Anne was a house wife.

There is no information about his marriage or divorce. He had dated only an American model, television personality as well as an actress. Due to some reasons the couple had got separated.

He had done many films as well as television shows. There is no other information about him regarding his personal life. But he was a very hard working man.

He had an estimated net worth of about $5 million.

Farley was born on 15 February 1964 in Madison, Wisconsin and raised in Maple Bluff.

His mother, Mary Anne (nee Crosby) was a homemaker and his father, Thomas John Farley. He had four siblings.

He was obese for much of his life. At the time of his death, he weighed  296 pounds (134 kg). His alcohol addiction and drugs abuse made him to be suspended from the cast of Saturday Night Live.

He was found dead in his apartment in the John Hancock Center in Chicago. As per the autopsy report, he died due to morphine and cocaine overdose.