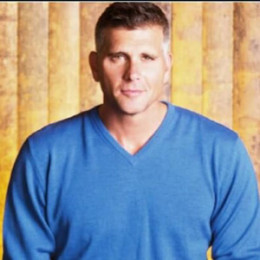 Christain Dietrich Meier Zender aka Christain Meier is a Peruvian actor and singer in Latin America, the US Hispanic market. Furthermore, he is known for his roles in films and telenovelas.

Meier was born on June 23, 1970, in Lima, Peru to Gladys Zender and Antonio Meier. His mother was a Miss Universe, and his father was a Peruvian politician, who was elected to the post of mayor of the Lima district.

He is the youngest of four siblings which includes sisters named Karina and Sibylle and a brother named Antonio Meier Zender. He is of Caucasian ethnicity and holds a Peruvian nationality.

The proficient musician formed the famous Peruvian alternative-rock band, Arena Hash along with Pedro Suarez Vertiz and Arturo Pomar. Previously he worked as a keyboardist of the band and started singing after several years. Later the band broke up and the members started pursuing a solo career.

Meier released an album entitled No Me Acuerdo Quein Fui which helped him earn a huge reputation. Then he began the production of his second album named Primero en Mojarme along with Manuel Garrido-Lecca, a well-known music producer.

In 2016, he released another album titled Nada Ha Cambiado (Nothing has changed) next to Gian Marco. Apart from his musical career, he has been forward in an acting career as well. He has acted and starred in numerous movies and soap operas. Moreover, he has featured in several ads and commercials as well.

The artistic actor, Christain Meier was married to a Peruvian actress Marisol Agguire in 1995. The couple met each other during the filming of the soap opera named Gorrion. They were blessed with three children together. The couple divorced in 2007.

Later he started dating Genesis Rodriguez, a popular actress. She was seventeen years younger than him. When the public began raising several questions about their relationship with Genesis which eventually led to their split.

As a musician and actor, Meier has successfully maintained a net worth of $100 thousand.

The talented actor, Christain was married to Marisol Agguire, an actress in 1995. They met each other on the set of Gorrion.