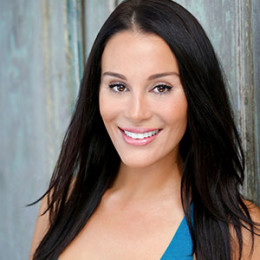 The two time Emmy Awards winning star Christina Cindrich is a versatile media personality who is active in many professions like Acting, Producing, and Hosting TV series. Besides her popular roles on TV and movies, she's widely famous among her fans being the producer of Private Islands.

Former Miss Teen USA Christina Cindrich is also known for her appearance in movies like Spider-Man 3, Live the Dream and Last Man on Earth.

As of now, Christina Cindrich is believed to be dating the famous American actor Diego Serrano who is famous for his role in Another World and Time Of Your Life.

Christina posted a picture of her and Diego on the valentines day via Instagram explaining about love which clearly indicates the relationship between the couple.

Christina Cindrich's with her Boyfriend Diego Serrano spending their vacation in Bali, Indonesia.

The actress is currently out of controversies and is living her life as a successful tv producer and host. Moreover, she worked in various working lines such as Acting, Modeling, TV producer, and Host. She is an active person on Instagram and often shares her vacation stories in the same account.

What is Christina Cindrich Up To Now?

Cindrich, the-38-year-old is working with the travel series, a television show, Global Passport with Christina Cindrich from 2014 till today's date.

As of April 2020, the 2Emmy winning Tv producer and host resides in Los Angeles, California with her partner. The starlet travelled to Thailand on April 6, 2020, to discovered its tradition and know more about tourism in Thailand.

In short, though the tv personality is speculated of being romantically linked to the actor, Diego Serrano neither of the pair has officially confirmed it nor they flaunt chemistry on PDA and socials.

This might be the first romantic love affair for the Desperate Housewives cast, Christina Cindrich but definitely the second to Ecuador born American actor, Serrano.

Diego has been in a long-erm live-in together relationship with actress Code de Pablo. Unfortunately, they parted ways in June of 2015 citing some personal issues.

Christina Cindrich holds an estimated net worth of $1 million, most of her income comes from her acting career. There is no wonder that she holds a net worth of $1million as the salary of the famous Hollywood actress is $250,000 annually.

As of now, the 37-years-old actress is an active person on Instagram and holds 87.3k+ followers. She is estimated to earn $346.5-$577.5 per post from her account. Similarly, she has her own youtube channel with 2.1k+ followers.

Started the day with a drive past the house I was born and raised in until I was 13. After that, drove past the home I lived in until I left for college. Went by Mt Lebanon High School then headed out to the countryside of Avella, PA where I said hello to my Grandma & Grandpap at their grave. Ended up at our family’s lake just soaking in all the wonderful memories from my childhood. I’m very grateful for where I am now and will always be proud of where I come from. Thanks to my family, I’ve always felt love at home. While this might not be a fundamental aspect of raising a child for many, it’s the single factor that made me who I am today.

Christina in her life worked in various entertainment sectors like Acting as well as Hosting and Producing TV shows. She garnered a lot of love and support from her fans and won Emmy Awards two times for producing Private Island. In Addition, her show Private Island ranked no.1 on the AWE TV channel with 25 million+ viewers.

My favorite winter sport is walking to the nearest warm bar. #HelloWinter

As being a versatile persona, Christina also produced and hosted many television series over 40 countries. In fact, she used to once worked with many of the world's premier executives and CEOs from industries like luxury, travel, real state.

Christina Cindrich was born on 26 August 1981 in Pittsburgh, Pennsylvania, the United States is of Virgo zodiac sign. She is the daughter of father Ralph Cindrich and mother Mary Rose Cindrich. She is of Croatian-American ethnicity.

Christina Cindrich back in her holidays in Maui- Road to Hana holding birds.

The beautiful actress graduated from Loyola Marymount University with a Bachelor of Arts in Communication. After her graduation, she started her career in the entertainment industry by debuting in the 1997 television series, Port Charles for 12 episodes.