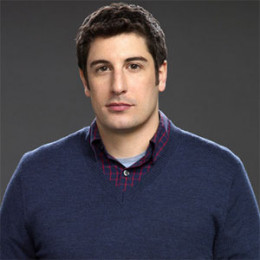 Jason Biggs, 40-years-old American actor, and comedian is popularly recognized for his character as Larry Bloom in the Netflix original series Orange is the New Black. His outstanding performance in As the World Turns helped him to get Emmy's nomination for Best Younger Actor. Biggs is happily married with his My Best Friend Girl co-actor, Jenny Mollen since 2008. The duo is proud parents of two children.

Jason Biggs was born as Jason Matthew Biggs on May 12, 1978, in Pompton Plains, New Jersey, the United States to Angela (née Zocco) and Gary Louis Biggs. Professionally his mother is a nurse and father is a manager of the shipping company.

He was bought up in a Roman Catholic family with his two sisters; Heather and Chiara at Hasbrouck Heights. Ethnicity wise he is an American and belongs to the mixed descent of English, Italian and Sicilian as his last name is also derived from his English ancestry.

Biggs completed his schooling from Hasbrouck Heights High School and its where he learned tennis. Later, he joined the  Montclair State University but didn't finish his education.

Jason Biggs started his acting career at the age of 5, and when he was 12 he was cast in HBO special, The Fotis Sevastakis Story, but due to some issue, it was never aired on TV.

He made his debut on a screen with a play called Conversations with My Father. Later, he appeared in the daytime soap opera, As the World Turns for which he won a nomination for an Emmy Award.

In 1991, Biggs made his TV debut with  FOX series Drexell's Class. His career took off when he starred in American Pie which was an international hit and helped him to gain public attention. Later, he worked on several movies like; Loser, Saving Silverman, The Graduate, Anything Else and much more which provided him the new tag as a comedian.

Further, he appeared in other movies too such as; Texas Rangers, Over Her Dead Body, Amateur Night. In 1988, he was awarded Screen Actors Guild card for his contribution on a TV commercial for Pathmark.

Jason Biggs is a married man; he tied the knot with his longtime girlfriend, actress Jenny Mollen on April 23, 2008, in Los Angeles at an intimate ceremony.

Later, they had a second and huge wedding ceremony which was held in California Napa Valley in mid-June.

Ugh she is OBSESSED with me.

In 2014, the pair was blessed with their first child, son, Sid Biggs. After three years, they welcomed their second son, Lazlo Biggs (born on October 2, 2017). Currently, Jason is living a blissful married life along with his wife and kids. The happy family resides in NYC.

They called their first son Sid as 'the Dictator'.

Biggs stated about his relationship,

"In our relationship, one thing that we've done really well is we've identified what sort of responsibilities we like to take on with the kids."

When asked if they consider sex a good work-out, he said,

'It depends on who's, sort of, running the show. She's usually on her phone, scrolling Instagram.'

He compared his sex life as 'getting on the treadmill.'

The actor who struggled with drugs and alcohol addiction earlier celebrated one year of sobriety in October 2018.

I first tried to get sober over 5 years ago, when the weight of my obsession with booze and drugs became too heavy for me to handle. Turns out this shit is hard. After some fits and starts, I’ve managed to put together one year of sobriety. I’m as proud of it as anything in my life. If you’re struggling, know there’s help. Don’t be ashamed. We can do this.

American Pie fame actor, Biggs has earned an astonishing net worth form his acting career which is estimated around $13 million. He charged an outstanding sum for his work on movies and series.

From American Pie, he earned $409 million from all 4 seasons which is considered as one of the most successful franchise movies.

The duo exchanged vows on April 23, 2008, just after three months of their engagement. They are together since 2008 and enjoying their blissful married life with their two children.

Lazlo Biggs is the second child of Jenny and Jason. He was born on October 2, 2017.