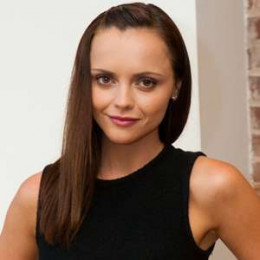 Christina Ricci, an American actress, is currently married to James Heerdegen since 2013. She was born to mother Sarah, a real estate agent and father, Ralph Ricci, a lawyer and a group therapist. Christina completed her studies from the Edgemont Elementary School, Glenfield Middle School, Montclair High School, and the Morristown-Beard School. Her parents got separated when she was only thirteen years old.

Christina Ricci worked as a co-host for the educational series, “Bug City”, in ten volumes. She is married to James Heerdegen.

The couple first met while working on Pan Am and married on 26 October 2013. They have a son together named born in August 2014. Christina is the National spokesperson for the case of the Rape, Incest & Abuse at National Network. There is no controversy or rumor surrounding her so far.

She opened up about life at home and motherhood in March 2017. She said,

"Marriage shows you your flaws in how you deal with things and having a child forces you to grow up at the speed of light. I'm a completely different person than I was before I had my child."

"Because I was so celebrated for being a child, I think I held onto that immaturity for a very long time. It was the thing that made me special. Then at a certain point, like 35, it’s not so special to be immature."

She's living a blissful married life with her husband with no sign if divorce.

Christina Ricci was born on 12 February 1980 in Santa Monica, California.

She made her acting debut in Mermaids in 1990. She gained wide popularity performing in Sleepy Hollow, Monster, Prozac Nation, Anything Else, and The Smurfs 2.

She is married to James Heerdegen. The couple first met while working on Pan Am. They have a son together.

Freddie is the only one child of this couple; he was born in 2014. There is not much information about him.