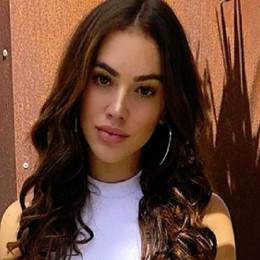 What is the Relationship Status of Chrysti Ane? Is she Dating Someone? Know about her Personal Life

Chrysti Ane is currently relishing the live-in together relationship with the famous American actor Ryan Guzman. The duo seems to share a good bond and is living a prosperous life together.

The famous Power ranger Ninja Steel actress and her partner who got engaged in December 2018 after kindling romance for few months.

2018 has been a year of unexpected surprises. New jobs, new lives, and new love. Each one getting better than the next. As the year rounds the corner to its end, we both believed it couldn't get any better. We were wrong! The newest/best surprise has yet to arrive but is on it's way. To living our BEST lives! #DaddyAndMommy #Mateo Or #Genevieve

After Ryan, Chrysti also explained about her pregnancy and continued gymming even during five months pregnant. The couple finally welcomed their first baby boy on 24th January 2019 whom they named as Mateo Guzman.

Instagram VS. real life! - Now that it’s out there’s sooo much to tell you guys! I have still been keeping up at the gym and I have a few abs left at #5Months . I’m not lifting as heavy as I used to so the gains are counting on repetition and consistency to stay with me - It’s been a bit difficult for me to watch my body changing, but as soon as I put into perspective that I’m creating a little angel with the love of my life it makes everything so worth it. - My goal is to stay in good shape and stay healthy through this entire pregnancy. I’m more than halfway there.

They knew about the sex of the baby two weeks after announcing the pregnancy news and the two were so excited to see the adorable child for the very first time.

On December 8, 2019, the starlet wrote on her Instagram, "Though we were Total parents last night and didn't know 90% of the songs Thats Ok cuz look at my mans.

The Brazilian fitness model and her beau, Ryan Guzman aren't yet separated in fact the bonding between the two has grown stronger than before.

On April 18, 2020, Chrysti took a cozy snap of herself posing alongside her partner holding a drinks on their hands. In the picture, both of them wore a half lowers while Ryan can be seen in a semi naked look.

Chrysti was previously never rumored for dating anyone except her current partner Ryan. However, her mate was previously in a dating relationship with actress Melanie Iglesias.

Guzman and Iglesias dated for a couple of years and finally separated in December 2014. Nonetheless, they announced being no more together in January of 2015 while attending one of the event.

What is the Net Worth of Chrysti Ane?

Chrysti Ane holds an estimated net worth of $1 million all thanks to her acting career. The actress earned that much of fortune working in various modeling and acting projects.

Moreover, the actress was believed to have a salary of over $500 per hour on Power ranger series and as of now, she is expected to have $81,000 per year for movies.

Popular actress and model Chrysti Ane on her Instagram.

The 25-year-old actress made her television debut in the Brazilian television series named Malhação Casa Cheia on July 2013. She worked in the series as Meg on the 21st season of the series. After that, she worked in the Power Ranger Ninja Steel for two seasons which was released on Nickelodeon on January 21, 2017.

She worked in the series as a Pink Ranger for two seasons which included 44 episodes. After her work in the Power Ranger Series, she is called as the hottest Pink Power Ranger ever existed.

Ane also tried her hands on the film industry in 2016 television movie A Housekeeper's Revenge with the role of Kayla. She starred along with many television personalities like Kathryn Newton, Kenton Duty, Tom Maden and many more.

The Brazilian-American actress owns a couple of bikes and cars. Being a speed lover, she loves to go on for bike rides and often shares pictures riding them. As of now, she garnered many vehicles which include a Chevrolet SUV of $23,000+ in the market and Ducati 899  Panigale of $18,995.

Christi's fiance is also a well-known actor and holds an estimated net worth of $2million. Both of them mutually share their net worth and lives together.

Chrysti Ane was born on 26 July 1993 in Rio de Janeiro, Brazil as Chrystiane Lopes. The actress-model shifted to the United States at the age of six with her parents.

Chrysti Ane on the way to check the gender of her child.

The hazel-eyed actress studied at the Union High School in Redondo Beach, California. Moreover, she joined the reputed Aaron Speiser Acting Studio for her acting growth which was situated in Los Angeles, California.

In addition, Ane is an active person on Instagram and owns 350k+ followers until now. Further, she also uses Twitter and Facebook where she owns over 28.5k followers.

Chrysti and Ryan were blessed to have their first son on 24th of January 2019 which they named as Mateo Guzman.