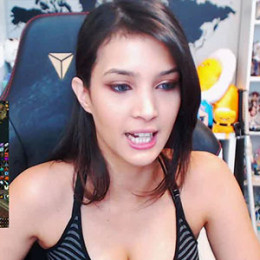 CinCinBear is an American gamer who rose to fame after streaming on the online gaming platform Twitch. She started streaming since June 8, 2014, and mainly plays games such as World of Warcraft and Minecraft on her channel.

CinCinBear is unmarried and not dating anyone at the moment. She is quite ambitious and hardworking which might be the reason she wants to attain more focus on her career than anything else.

finally made it to Machu Picchu! My top place to visit. I’m so grateful that I was able to fulfill this dream and it’s all thanks to you guys!

CinCinBear is enjoying her life to the fullest living an individual life. Moreover, she loves spending time traveling to different places which she posts on her social media. Besides, the Twitch streamer is also a vivid animal lover and owns two pet dogs.

How Much Is CinCinBear's Net Worth? Know About Her Salary, Earning, Income

CinCinBear has an estimated net worth of $200,000. She accumulated that wealth from her successful career as an online gamer.

According to reports of CNBC, advertising revenue averages about $250 per 100 subscribers. She boasts more than 448,076 followers on her Twitch account. We can safely say that she makes a handsome buck from her career.

CinCinBear's most viewed clips of all time!

CinCinBear was born Cinthya Alicea on December 25, 1992, in the United States. Likewise, she also grew up in the US.

She holds American nationality and belongs to the white ethnical background. She began playing video games from the age of 8 after she received Nintendo 64 for her Christmas gift.

The twitcher star is 5 feet 3 inches tall and weighs around 50 Kg. Her hair is black and eye color is blue. As of 2019, the charming star is 26 years old.

A known fact to all, Twitch strictly prohibits nudity, pornography, and sexual content. The channel suspended CinCinBear due to a wardrobe malfunction that occurred during 26th June.

It's pretty sure that she won't get a chance to return to the site for 30 days but it's still unclear how long the ban will last.