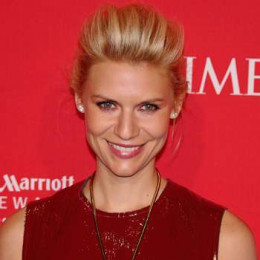 Claire Danes is an American actress. She was first seen portraying the role of Angela Chase in the 1994 series 'My so-called life'. The role made Claire win her first Golden globe awards. She made her first film debut in 'Little women'. Since 2011, Claire has starred as Carrie Mathison in the show time series Homeland. She also won 2 Emmys and 2 Golden globe awards for this series. Claire is the daughter of Carla Danes her mother and Christopher Danes her father.

Claire Danes was rumored to be dating with Leonardo DiCaprio when they shared many hot scenes in Baz Luhrman's adaptation of Romeo-Juliet in 1995. Claries has also been rumored to have hooked up with Matt Damon in 1997. The rumored were not clarified. Claire has been married for 6 years. She has one son who is 3 years old. She has been in a relationship with her co-actor previously.

Claire Danes has been married to Hugh Daney for almost 6 years now. They are still together. They have been blessed with a baby boy who is 3 years old now.