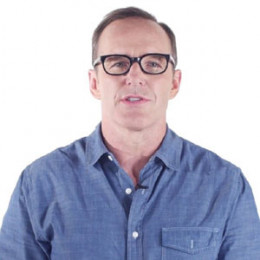 Clark Gregg is an American actor, director, voice actor and screenwriter best known for the role as Agent Phil Coulson in the Marvel Cinematic Universe. He has also starred as Richard Campbell on the CBS series The New Adventures of Old Christine.

Gregg was born on April 2, 1962, in Boston, Massachusetts to Mary Layne and Robert Clark Gregg. His father Robert was an Episcopal priest and Stanford University professor.

Clark traveled more than seven cities by the age of 17 as his family relocated frequently. He joined a high school in Chapel Hill, North Carolina and then attended Ohio Wesleyan University for his further studies.

At his early age, he worked at several places such as being a bar back, a security guard at the Guggenheim Museum, and a parking valet at a restaurant. Then he joined New York University’s Tisch School of Arts and studied drama and English.

The proficient director was a founding member and an artistic director of the off-Broadway Atlantic Theater Company. He has been featured in a number of supporting roles in films including Lovely & amazing, The Human Stain and In Good Company. He also appeared as a guest on the TV series Will & Grace, Sports Night, Sex and the City and The West Wing.

Clark is the screenwriter and a director of the movie Choke which was based on the Chuck Palahniuk novel of the same name starring Sam Rockwell. He also appeared in the movie Iron Man and reprised his role as Agent Coulson for Iron Man 2.

In 2010 he was a part of the cast of a staged reading of Larry Kramer’s The Normal Heart along with Dylan Walsh, Lisa Kudrow, and Tate Donovan.

Clark is a married man and the lawful husband of an actress, Jennifer Grey. She officially became his wife on July 21, 2001, in a private ceremony surrounded by their close friends and family. They have a daughter together named Stella.

Clark is a sober alcoholic and describes himself as a member of a Jewish family. He and his wife Jennifer Grey were the two demonstrators at the 2017 Women’s March held in Washington, D.C.

The popular director is living a luxurious life with a net worth around $5 million.  His salary is also estimated as $13698.63 which is double as an income compared to the data in the end of 2015.

Jennifer Grey is a famous actress known for her roles in Dirty Dancing and Ferris Bueller's Day Off. She is also the winner of Dancing with the Stars season eleven.

Stella is the only daughter of Clark and Jennifer. She was born on December 3, 2001.