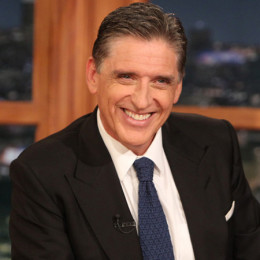 Two times Emmy Award winner, Craig Ferguson is a Scottish-American television host and late-night talk host. He is also the winner of the Peabody Award for his late-night show, The Late Show with Craig Ferguson. He came to limelight after he portrayed the character of the Nigel Wick on the ABC sitcom The Drew Carey Show. He has even written and starred in three movies, directing one of them. As a writer, he has written two books: Between the Bridge and the River and American on Purpose. He has married thrice and divorced twice. Currently, he is in a marital relationship with wife Megan Wallace-Cunningham and is blessed with a baby boy, Liam James.

Born on 17th May 1962, in Springburn, Glasgow, Scotland, Craig Ferguson is the son of Robert Ferguson and Janet Ferguson. He grew up along with three siblings: two sisters Janice and Lynn Ferguson Tweddle and one older brother Scott.

His younger sister, Lynn is a successful comedian, presenter, and actress known as the voice of Mac in the 2000 stop-motion animation movie, Chicken Run.

When he was six month, his family moved to a council house in Cumbernauld. They lived there as Glasgow was re-housing many people following damage to the city from World War II.

In 1975, he visited the United States to meet his uncle who lived on Long Island, near New York City. In 1983, he returned to New York City and began working in construction in Harlem. Later, he became a bouncer at the nightclub Save the Robots.

Ferguson began his career as a drummer in the entertainment world. First, he joined a rock band, Exposure, and a punk band, The Bastards from Hell. The band changed its’ name as Dreamboys fronted by vocalist Peter Capaldi, one who inspired him to try comedy.

With encouragement from Capaldi, he tried comedy but had a nerve-wracking first appearance. Later, he premiered the character, Bing Hitler in Glasgow’s Torn Theater and subsequently become a hit at the 1986 Edinburgh Festival Fringe.

After that, he appeared on television in Red Dwarf, STV’s Hogmanay Show and One Foot in the Grave Christmas special OneFoot in the Algarve in 1993. During the period, he presented a series on Scottish archaeology for Scottish Television entitled Dirty Detective.

He also traveled throughout the country examining archaeological history including places like Skara Brae and Paisley Abbey.

In 1994, he played the role of Father MacLean in the highly controversial production of Bad Boy Johnny and the Prophets of Doom at the Union Chapel in London.

The same year, he appeared in Oscar Madison in The Odd Couple at the Edinburgh Fringe. According to the sources, he will return to UK television for the first time in 25 years in a guest role in BBC Scotland's comedy Still Game in 2017.

In November 1994, he returned back to Los Angeles. His first US role was baker Logan McDonough on the short-lived 1995 ABC comedy, Maybe This Time where he shared the screen with Betty White and Marie Osmond.

He made a breakthrough after he was cast on The Drew Cary Show where he played the role of boss Mr. Wick.

His unique character received a positive response from the viewers and even after he left the show, he remained a recurring character on the series for the last two seasons.

During the period, he wrote and starred in three movies: The Big Tease, Saving Grace and I’ll Be There. He also directed the movies for which he won the Audience Award for the Best Film at the Aspen, Dallas and Valencia film festival.

His third comedy, I’m Here to Help, released on Netflix in 2013 which gained him a positive response on 4 out of 5 stars on Netflix and peaking No.6 on Billboard top comedy albums. He also received a 2014 Grammar Awards nomination for the Best Comedy Album.

By the end of 2009, he topped Jimmy Fallon in the ratings with a 1.8 rating /6 shares and Fallon receiving a 1.6 rating/6 share. By 2014, he had faltered dragging those of Late Night with Seth Meyers with an average of 1.35 million viewers versus 2.02 million.

He announced to leave The Late Late Show on 28th April 2014 with the final episode on 19 December but later, he extended a six-month contract and gave CBS more time to find a new host.

According to the sources, it is said that he received $5 million as part of his contract because he was not selected as the replacement for David Letterman’s Late Show. Soon after he left the show, CBS continued the franchise with James Corden as the new host.

Ferguson has made several guest appearance in the TV shows including The Tonight with Jay Leon, Late Show with David Letterman, Late Night with Conan O’Brien, Rachael Ray and much more. He hosted Discovery Channel’s 23rd season of Shark Week in 2010 and appeared in Toby Keith’s Red Solo Cup music video that released on 10th October 2011.

On 18th February 2016, he hosted a historical talk show, Joins or Die with Craig Ferguson, on History. It is said that the title is a reference to a Benjamin Franklin political cartoon published in the Pennsylvania Gazette on 9th May 1754.

He also launched The Craig Ferguson show, a two-hour talk show on the Comedy Greats channel and Faction Talk on SiriusXM Satellite Radio on 27th February 2017. Moreover, he has published two books till now.

His novel, Between the Bridge and the River, released on 10th April 2006 which is a sequel to the book, to be titled, The Sphinx of the Mississippi.

His second book is a memoir, American on Purpose: The Improbable Adventures of an Unlikely Patriot which went on sale 22nd September 2009 in the United States. Its audiobook version was nominated for a Best Spoken Word Album Grammy on 1st December 2010.

Ferguson has been married thrice in his lifetime. He married Anne Hogarth in 1983. After living in a marital relationship, nearly for three years, they separated on 1986. During the time they lived in New York.

After divorce with his first wife, Ferguson married Sascha Corwin, in the middle of 1998. From his second marriage, he shares one son, Milo Hamish Ferguson. Unfortunately, his second marriage didn’t last long. The husband and wife divorced in 2004. They share custody of Milo and live near each other in Los Angeles.

Currently, he is married to Megan Wallace-Cunningham, since the middle of 2008. Their wedding ceremony was a private one and held at her family farm in Chester, Vermont. Ferguson announced on Twitter that his wife Megan was pregnant on 14th July 2010. In January 2011, they welcomed a baby boy, Liam James.

Once he had considered committing suicide on Christmas Day 1991, but when offered a glass of sherry by a friend for celebrating the holiday, he was distracted from jumping off Tower Bridge in London as he had planned.

He has honorary citizenship from every state in the US. He became an American citizen on 1st February 2008.

According to the sources, Craig Ferguson has an estimated net worth of $30 million. He is paid quite a good sum of salary, earning around $8.5 million.

Currently, he lives in a lavish house located in the lower Bronson Canyon priced around $4.7 million. He also has a $5.6 million home in Malibu. Back in 2013, he sold off his Beachwood Canyon mansion for $1.74 million.

Anne Hogarth is the first wife of Craig Ferguson to whom he married in 1983. The husband and wife lived in a marital relationship nearly for three years and divorced.

Form 1998 to 2004, Craig Ferguson was in a marital relationship with wife Sascha Corwin. Corwin is a founder and proprietor of Los Angeles' SpySchool.

Craig Ferguson is currently in a marital relationship with Megan Wallace-Cunningham. Megan is an art dealer.

Born in 2001, Mio Hamish Ferguson is the one and only son of Craig Ferguson and Sascha Corwin.

Born on 31st January 2011, Liam James is the one only son of Craig Ferguson and Megan Wallace-Cunningham.