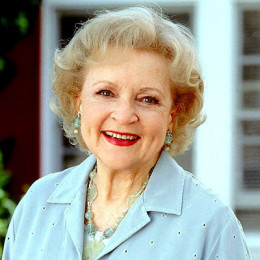 Betty White married thrice but none of the marriages long last except for her third one. She had no biological child but she mothered three stepchildren with her late third husband, Allen Ludden. First, she married a U.S Army Air Corps pilot, Dick Barker in 1945 whom she divorced within a year.

Well, Dick wanted a normal life, something White didn't approve of. Within the year of their marriage, since they moved to Los Angeles, their marriage was tested. As a result, White and Barker decided to divorce.

After her second marriage failed, she got married to her third husband Hollywood agent, Lane Allen in 1947 but the marriage did not last long either as they divorced in 1949. While White wanted to have a career, her husband wanted children.

Later on, she went on to marry the television personality, Allen Ludden with whom she remained until his death in 1981. Unfortunately, Ludden died of stomach cancer. Following, her last husband's death, White remained single.

On New Years' Eve 2021, Betty White took her final breath and farewelled her family at her home in Brentwood, Los Angeles. White was only seventeen days away from turning 100 and had a New Years' celebration program.

Many actors and well-known public figures expressed their condolences to White and her family. Ryan Reynolds, Michelle Obama, Andy Cohen, Sandra Bullock and President Joe Biden were renowned celebrities who thanked White for her service to the entertainment industry.

In 2013 she was awarded Guinness World Record for the longest television career for a female. White is best known for her role in The Golden Girls and The Mary Tyler Moore Show. Besides, the actress was married thrice but did not last long. She has no children of her own.

Betty White had an estimated net worth of $75 million and made her money from her acting career which she successfully ran for decades.

Betty White was born on 17th January 1922 in Oak Park, Illinois. White was the only child of Christine Tess and Horace Logan White.

Started celebrating my birthday a little early with @parademagazine. That's a LOT of candles!!! #parademagazine

In high school, Betty wrote and played the lead in graduation play. There she decided to become an actress in the future. She attended Horace Mann School Beverly Hills and later joined Beverly Hills High School.

She had Dick Barker as her first husband . They had married when she was of 23 years age in the year 1945.

She had married again to Lane Allen in year 1947 and according to the sources this realtion could also not last longer.

She had married to Allen Ludden in year 1949 and no further information regarding her divorce has been known . She did not have any child with any of her husbands.