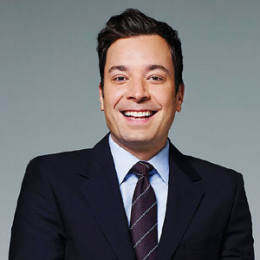 Jimmy Fallon is a comedian, TV host plus musician from America. He is recognized as a cast member on Saturday Night Live and the host of late-night talk show The Tonight Show. Fallon is a married man. He lovely wife Nancy Juvonen is a Hollywood producer. They are living a blissful and contented married life together.

Jimmy Fallon was born as James Thomas Fallon on September 19, 1974. He was born to Gloria and James W. Fallon in Bay Ridge, Brooklyn, New York. He is of mixed descent. He grew up with his sister Gloria with whom he fondly watched Saturday Night Live and re-enacted it frequently. As a child, he had an equal interest in both music and comedy and performed in several contests.

Fallon went to Roman Catholic elementary school, St. Mary of the Snow in Saugerties. He then enrolled at the College of Saint Rose where he took Computer science as his major subject at first and later changed his subject and graduated in Communication in 2009.

Popular American comedy series hired Fallon as a cast member in the year 1998 and he appeared in the show till 2004. He initiated his dream career from then on. Prior to that, he performed stand-up tours impersonating various celebrities around the country. He also took improvisation classes with The Groundling at that time. However, Jimmy's first debut was on the show Spin City in 1998. He is also the author of I Hate This Place: The Pessimist Guide for Live which released in 1999.

Jimmy made his debut on the big screen with the movie Almost Famous with a minor role in 2000. The same year his comedy album The Bathroom Wall released. He also starred in the film Taxi in 2004 and Fever Pitch in 2005. He performed at The Tonight Show with Jay Leno with a song that he wrote in 2007, Car Wash for Peace.

In 2009, Fallon started his own show Late Night with Jimmy on NBC. He got an opportunity to host the long-running show The Tonight Show as a permanent employee in 2014.

The 43-year-old Jimmy resides in New York along with his wife and children. His wife Nancy Juvonen is a Hollywood producer. The duo tied the knot on December 22, 2007, on Necker Island in the Caribbean. The couple welcomed their first child Winnie Rose in July 2013. Fallon’s second daughter, Frances Cole was born on December 3, 2014. He is living a blissful and content married life.

As an accomplished comedian, actor plus a late night host Jimmy earns quite a lucrative amount as his salary. His annual salary is $11 million whereas his current estimated net worth is $35 million. He certainly lives a lavish and well-maintained life with an amount he earned.

Jimmy Fallon married his wife Nancy Juvonen on December 22, 2007. They held their marriage ceremony on Necker Island in the Caribbean.

Winnie Rose is the eldest daughter of Jimmy Fallon from his wife Nancy Juvonen. She was born on July 2013.

Frances Cole is the youngest adorable daughter of Jimmy and Nancy Juvonen. she was born on December 3, 2014.