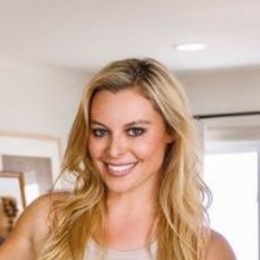 Cristy Lee is best known as the former Motor Trend Network's All Girl's Garage co-host. Also, she is recognized for hosting 'Celebrity IOU: Joyride on Discovery +,' Steal This House' on HGTV, and 'Barrett-Jackson Live' on Discovery.

Cristy Lee is presumably single and is only focusing on her career. Many fans want to know their favorite celebrity, but she never revealed her romantic link up. Maybe Lee is in an intimate relationship and dislikes sharing her love life publicly. 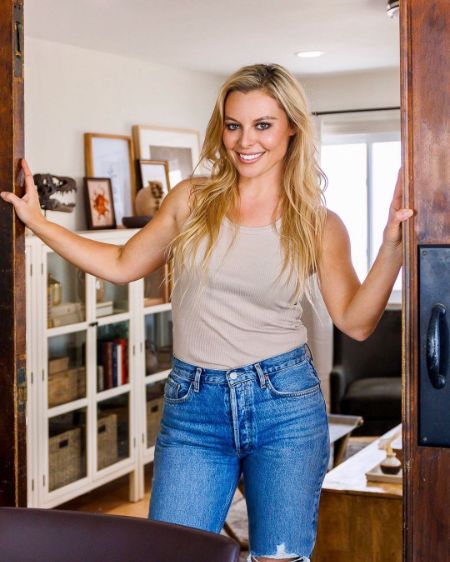 Cristy Lee is currently single and without a boyfriend. SOURCE: Instagram(@cristylee09)

Furthermore, her sexual orientation is straight. But it looks like, despite her hot looks, Cristy never dated anyone before. The television personality has maintained a very private life and is active on social media. However, she has not posted anything about her relationship with her boyfriend.

During her free time, Cristy prefers to drive her motorbikes to performance driving school or cruise around the country. She has over 18 years of riding experience. Cristy can squeeze in snowboarding, fitness, weightlifting, and her projects despite her hectic life.

Cristy Lee's affair with sports cars and motorcycles began as a child when she worked at her father, Barry McCoy's local mechanical shop. In DeLand, Barry is the owner and operates an auto garage. Later, she started to customize bicycles. 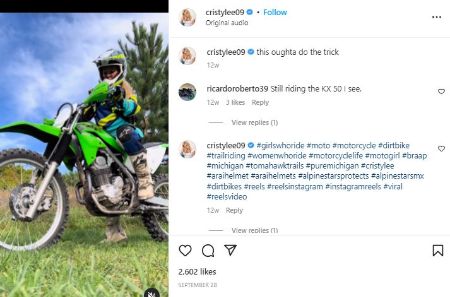 Cristy Lee is a motorcyclist and automotive enthusiast. SOURCE: Instagram(@cristylee09)

A certified auto diva purchased her first motorbike at 18 years old young. The attractive blonde, also fond of getting her hands dirty repairing cars, is known for her expertise in fixing cars, bikes, and trucks.

Along with Sarah Bogi, Jessi Combs, and Faye Hadley, Cristy was a member of the hit show All Girls Garage. The show asked her for an audition for the place as a host on a female-oriented television show titled "All Girls Garage." She replaced Heather Storm as a host in season 6 of MotorTrend's show.

Cristy Lee is a multi-talented woman. Her latest work includes taking the position of the automotive specialist on the forthcoming spin-off of HGTV's "Property Brothers" Discovery plus the reality TV series "Celebrity IOU: Joyride" alongside Ant Anstead from "Wheelers Deal." 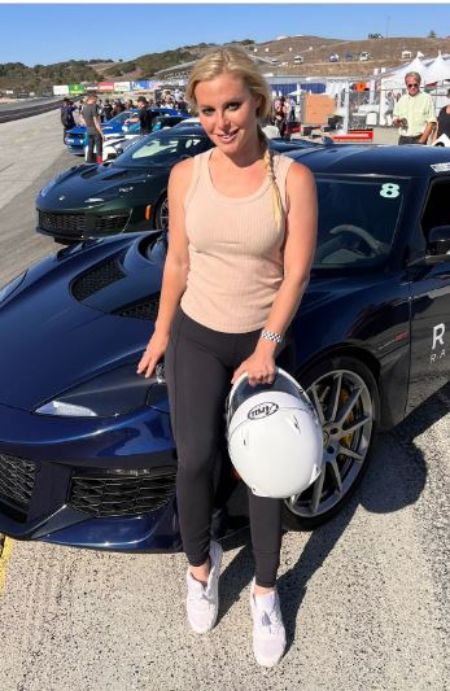 Cristy Lee is popular for her show "Steal This House." SOURCE: Instagram(@cristylee09)

The show's basis is that it invites A-list celebrities every episode and allows them to work on a car they can later gift to someone they love and care about. A year later, she made an appearance in the movie called "Tunnel of Fire."

The self-made star in the automobile repairing industry flaunted her classic car restoration and sophisticated automotive endeavors in the all-female automotive show "Garage Squad. The show has been fascinating since its first premiere in 2014. And Cristy not only restored vehicles but also gave training to young students in her performance.

A genuine motorsport lover is popular among fans for her work as a host on the 'Barrett Jackson Car Auction Live.'  Always on the go, Cristy is counted as the master of everything motorcycles and cars while empowering other women. For her, just amazing to see plenty of women in a historically male-dominated industry

What's the Net Worth of Cristy Lee?

It is believed that Cristy Lee has summoned an estimated net worth of $2 million. Initially, Lee bravely moved from Daytona Beach to Detroit after finishing her education to invest in the real estate business.

Watch the video of Cristy Lee teaching Rachel how to ride a Kawasaki.

As Lee worked for such notable networks, she probably enjoys a reasonable payroll. In the United States, TV hosts make an annual income of around $60,000. She once worked as a sports reporter for TORC NBC learner's good fortune through her career as a model.

Many recognize her for her role as a co-host on the 'All Girls Garage' from 2012 broadcasts for the MotorTrend Network. As per Top Speed, there was a rumor that the show's producers were having budgeting problems and cutting Cristy off as a reason.

Similarly, her surgery looks to have taken place around the same that she took her to leave the series. Therefore, health and recovery might have been the cause. Being involved in various fields and earning money, Cristy Cristy wasn't doing much for a while and didn't return to TV until 2022.

Precisely, Lee is back on a television screen with her brand new show 'Steal This House" after a heartbreaking exit from Garage Squad. All in all, Cristy has transitioned from projects focusing on cars and motorcycles to real estate. She talked about her show "Steal This House" with Hour Detroits and real estate, which has been more of a behind-the-scenes passion for her.

There were rumors about Cristy Lee's accident spread around social media. It was because of one of her dear friends, Jessi Combs, who became a victim of a road accident years ago.

Also, Lee had surgery a few years back, which triggered the misinformation making everyone think that the TV host had an accident. Talking about Jessi, she died in an unfortunate accident while trying to break her land speed record in a jet car.

Don't forget to visit Married Wiki for exciting biographies and news of celebs.