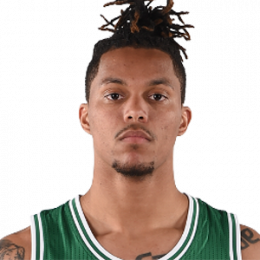 American professional basketball player, Damion Lee is currently playing for Santa Cruz Warriors of the NBA G League. He began his professional career right from the school time. Later, he played for Derek Dragons and Louisville Cardinals. After three years in Drexel, he was transferred to Louisville for his final year of eligibility.

Apart from this, Lee is currently married to his longtime girlfriend Sydel Curry. The lovely pair tied the knot on 1st September 2018.

Damion Lee was born on 21st October 1992 in Baltimore, Maryland under the birth sign Libra. Lee is American as per nationality and is of African-American ethnicity. His mother, Michelle Riddick raised him in Baltimore.

Lee finished his schooling fro Calvert Hall College High School in Towson, Maryland. During his time in Calvert, he was the Second-Team Baltimore Sun All-Metro and a First-Team All-Baltimore Catholic League selection.

In 2015, Lee earned a General Humanities and Social Service degree from Drexel. He became the member of 2011-12 Drexel Dragons men’s basketball team. In the team, he played on point guard position.

Later, Lee graduated from the University of Louisville. He majored in Special Education with a concentration in assistive technology at the University. He played for the Louisville Cardinals and played under the head coach, Rick Pitino.

His playing skills were really appreciated by all and his team, the team ranked 13th best team in the country.

Damion Lee’s professional career started in 2016. He joined the Miami Heat for the 2016 NBA Summer League after going undrafted in the 2016 NBA draft. In 2016, Lee signed with the Boston Celtics. He was waived by the team on October 20, after completing two preseasons games.

Lee signed a contract with Maine Red Claws on October 31. He was again abandoned by the team after suffering the season-ending injury. As of 2017, he is playing for Santa Cruz Warriors of the NBA G League. He was traded to the team on August 24, 2017.

Lee is unmarried and has no children yet but is engaged. In November 2017, the professional player got engaged to his longtime girlfriend, Sydel Curry. The relationship was revealed after Sydel showed him off on her Instagram account in early 2017.

Disclaimer: long caption below! September 1, 2018- you were a dream. From the moment I woke up, I just felt at peace. With expectations of having feelings of nervousness, anxiousness, etc. I was just at peace. I’ve honestly never felt a sense of calm in such an important part of life. And that is what @dami0nlee gives me. Knowing that at 5pm I would walk down the aisle and say yes to forever with the greatest gift that God has given me is something that even right now is hard for me to explain. I love this man more than words can tell but now i get to live my life showing it and telling him every day! I have tons of people to thank but right now, I just need to relish in the fact that I have found my soul mate, we are now one, and I am Mrs. Lee!!!!!

Sydel posted a picture together with a caption that read:

‘’ Thank you, Jesus, for this man. Thank you for your perfect timing. Tonight I said yes to the man of my dreams and I couldn’t be more happy. I love you Damion Lee and cant wait to be your wife. Holy crap!!! #HappiLeeEverAfter omg omg omg omg omg omg omg. #ForeverEver.’’

The couple first met when Sydel was studying at Elon University and started dating each other.

Lee tied the knot to his love Sydel Curry on 1st September 2018. The duo exchanged vows in front of their family and friends in Charlotte, North Carolina.

Damion Lee, 26, stands at a height of 6 feet 6 inches (1.98m) and weighs 210 lbs. The professional Basketball player who has been playing since his school only recently started his professional basketball career. Lee's estimated net worth is possibly in millions. However, some online sources have reported his net worth to be around $600,000.

Lee earns an annual salary of $543,471 from his basketball career. In addition, he earned $50k signing a contract with Celtics.