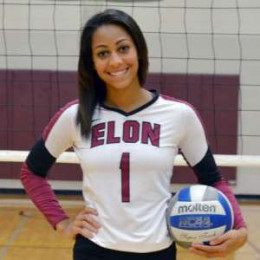 Sydel Curry is a volleyball player. She is the daughter of fellow volleyball player Sonya Curry and former NBA player Dell Curry. She attended Charlotte Christian School in Charlotte and she posted a career-high 40 assists in a five-set match against UNC Asheville, recorded a career-high 14 digs in a four-set match at Towson, and tallied three double-doubles on the season. Also, she played club for the Carolina Union, attending nationals with the team in 2012. She is engaged to her longtime boyfriend, Damion Lee.

Sydel Curry was born on October 20, 1994, in Charlotte, NC to Sonya Curry and Dell Curry. Both of her parents were athletes at Virginia Tech. She is American and belongs to the African-American ethnicity.

Sydel Curry is interested in volleyball since her school days and she used to be captain of her school volleyball team. She is a four-time CISAA All-Conference selection and three-time NCISAA All-State selection.

Curry has injured her knee during her freshman year, she played 22 matches on the season. In the match against, UNC Asheville, she posted a career-high 40 assists in a five-set match.

Sophomore year was the breakthrough year for Curry. After appearing in 28 matches. she earned the start 24 times. She led the team ranked at 5th place in the conference with 851 assists on the season.

Sydel Curry is engaged to her longtime boyfriend, Damion Lee in November 2017. Lee is a basketball player and he plays in the NBA G League for the Santa Cruz Warriors.

The duo first met at Elon University and started dating one another.

Curry expressed her happiness via her Instagram by posting a beautiful picture of them where she show-off her engagement ring.

Curry is closed with her brother, Stephen Curry, and with his wife, Ayesha Curry. Ayesha posted her sister-in-law picture on her Instagram and express her joy.

Sydel Curry's net worth is still under wrap. She is Volleyball player and the average salary of Volleyball palyers is $41,777. However, her fiance, Damino Lee has a net worth around $600,000.

Curry has more than 500k followers on her Instagram and she often posts her pictures and videos on her account.