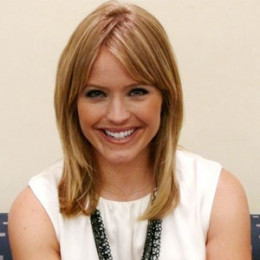 Sara Haines is an American television host and journalist best known for her work as a correspondent on Today, ABC News and Good Morning America. She is the wife of lawyer Max Shifrin.

Sara Haines was born on 18 September 1977 as Sara Hilary Haines in Newton, Iowa. She grew up with her three siblings.

Haines gained a Bachelor of Arts degree in Government from Smith College, Northampton, Massachusetts. While in college she had a keen interest in sports and used to play basketball and volleyball.

Sara started her career working in the NBC’s Page Program. Later in 2002, she was promoted as a production coordinator for NBC’s Today at Rockefeller Center. In 2009 she served as the show’s fourth hour contributing correspondent till 2013.

Haines joined ABC News as a correspondent and the pop news anchor of Good Morning America Weekend Edition 2013. She made her appearance as a co-host in several programs.

Afterward, she worked as a permanent co-host of The View show’s 20th season. The show premiered on September 6, 2016. The following year she was nominated for Daytime Emmy Award for Outstanding Entertainment Talk Show Host.

The 40-year-old Sara is a married woman. She took the vow with her husband Max Shifrin on November 22, 2014. They held the ceremony in the Bahamas.

They currently reside in Brooklyn, New York. The couple welcomed their son Alec Richard Shifrin on 5 March 2016. On June 2017 Haines made an announcement that they are expecting a baby girl as their second child.

Sara is one of the well-paid television host and journalist in the industry. He earns a decent amount from her career. Her current estimated net worth is $ 1 million.

Max Shifrin is the husband of Sara Haines. The duo tied the knot on 22 November 2014. They are living a happy life as a family.

Alec Richard Shifrin is the son of Sara Haines with her husband Max Shifrin. He was born on 5 March 2016.