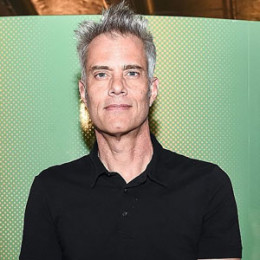 An American actor, Dana Ashbrook is best known for his acting skills as Bobby Briggs on the fiction television series Twin Peaks and prequel of Twin Peaks too. He is born in the filmy family with an actress mother and a college theater director father. Dana is inspired from his own family to build up his career in the acting field. As per the sources, he is married now. After his first break up he is being far from the relations and finally got married to Kate Rogal

Dana Ashbrook was born on 24th May 1967 in San Diego, California, US with the birth name, Dana V. Ashbrook. Gemini is his zodiac sign. He was born to father, Buddy Ashbrook ( an actor and a film director) and mother, D'Ann Paton ( an actress and a teacher). Ashbrook lived with his parents along with his siblings- Daphne Ashbrook(an American actress),  and Taylor Ashbrook (actress and director).

Dana started his career at an early age. His sister, Daphne's agent, saw him perform in a school play and was impressed by his acting. In 1992 he acted in TV film Bonnie and Clyde after Twin Peaks went off-air.

He then starred in various TV series like- W.E.R.I.D world, Crisis Center and films like- She's Out Of Control, Comfortably Numb, Python II. Ashbrook also appeared in various television shows like- Just Harried, Rules Of Engagement, Resurrection, Haystack and others.

As per the sources, it has been revealed that Dana will appear as Bobby Briggs in the revival of Twin Peaks in 2017.

Talking about his personal life, he likes to play basketball and tennis in his free time and is also a harmonica player. Ashbrook enjoys hanging out with friends and is adventurous, fun loving, playful person.

Moving on to his affairs, Dana had a girlfriend named, Marisa Tomei (an American actress). They dated in the year 1999, but their romance didn't last long, and the couple separated.

He is now married to Kate Rogal, an American actress. They haven't shared much about their married life but looking at the photos, they posted they seem very much in love. The couple has also posted intimate pictures of them. The couple doesn't have any children yet.

The freedom lover, Dana Ashbrook has an estimated net worth of $2 million. His source of income is movies, series, and TV shows.

Dana Ashbrook is married to an American actress, Kate Rogal. They still don't have any children yet.