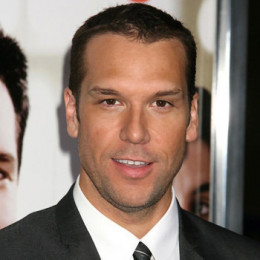 Dane Cook is a comedian and actor of American nationality known best for his goofy style and attitude. His albums of comedy have made him hugely popular within the audience. He was born on Cambridge, Massachusetts to Donna Jean and George Cook. He attended the Arlington High School and was raised in Arlington, Massachusetts. His album named Retaliation has been platinum and is the highest charting album in 28 years.

Dane Cook has been linked with several beauties throughout his life. His dating history includes not only actresses but singers of huge fame. His comic style is not the only thing he is famous for.

Happy Valentines Day to my Valentine @itskelsitaylor. I can’t say enough good stuff about this incredible woman. I’m a lucky sap to have her by my side. I like this pic because it captures how happy we are. We’ve already made amazing memories & I can’t wait to see what’s next — well besides us binge watching every season of Game of Thrones all over again before the new season.

Currently, he is dating a girlfriend named Kelsi Taylor 26 years his junior.

During a recent appearance on Jimmy Kimmel Live, he said,

"Sometimes I actually find myself saying, ‘Where has she been all my life?’ And then I realize she wasn’t alive for the first 26 years of it."

Dane Jeffrey Cook was born on 18 March 1972 in Cambridge, Massachusetts.

He is famous for his comedy albums including Harmful If Swallowed, Isolated Incident, and Rough Around The Edges: Live From Madison Square Garden.