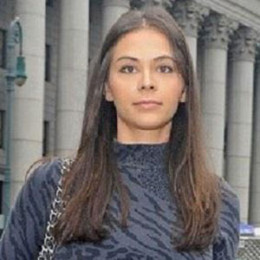 Daniela Rajic is a former strip dancer and model well known for her relationship with NBA star Pual George who plays for Oklahoma City Thunder. She amassed a good fan base on Instagram.

Daniela Rajic is currently dating the famous American basketball star, Paul George. In the summer of 2013, Daniela first met Paul at the Tootsie Club. After a few months of their love-affair, she became pregnant.

Daniela gave birth to her daughter Olivia George on May 1, 2014.

Paul fell into controversies when Daniela submitted a legal notice in New York Court. On this, she revealed that Paul had given $1 million to abort his child.

Despite this, Paul said that he would fully embrace his responsibilities as a father and would provide financial support to the child when it proved. After a DNA test, the results led to confirmed that Paul was the biological father of Olivia.

Following this, both parties came to an agreement to co-parent their daughter, Olivia. The duo continued their relationship later and have been together.

They welcomed their second child, Natasha George on 9th February 2018.

Daniela Rajic has an estimated net worth to be around 2 million. Daniela earned a good amount of salary from her modeling career. She featured as a model of big magazines like wrapup magazine, Kontrol magazine, etc.

On the occasion of Mother’s day, her ex-boyfriend Paul George gifted her a wonderful car, the Land Rover which costs around $65,600.

On the other hand, her ex-boyfriend Paul George share a net worth of $40 million. Moreover, he owns a property of $2.2 million in California, United States.

Daniela Rajic was born on 12th November 1990, in Queens, NewYork, United States. Her birth sign is Scorpio. She holds an American nationality and belongs to white ethnicity. The dancer has one sister Kristina Rajic. From her childhood days, she was interested in dancing and modeling.

Daniela pursued a career as a strip dancer. She worked as a stripper in one of the most infamous strips club of America, Tootsies. The club is well known as a hangout for professional athletes. Moreover, she worked as a model for several big magazines such as Kontrol magazines and wrapup magazine.

Daniela stands with a good height and very fit and stunning body. Her hair color is brown and eyes color is hazel.

Olivia George is the daughter of Daniela Rajiac, a model and Paul George, a famous NBA player, who played for the Oklahoma City Thunder of the National Basketball Association

Natasha George is the daughter of Daniela Rajic and Paul George. She has one sibling, Olivia George.