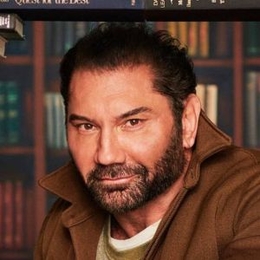 A former professional wrestler, Dave Bautista married thrice in his lifetime by far. His first marriage was with his first wife Glenda Bautista. Dave dated Glenda for some years and got hitched on March 25, 1990. Their wedding took place in a private ceremony in front of close friends and family. 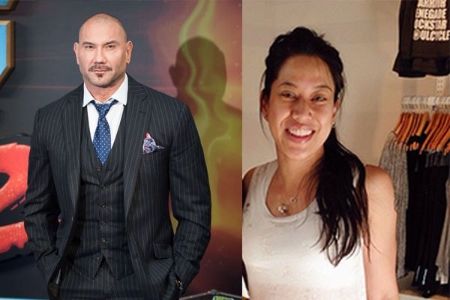 Everything seems to be going pretty well, but differences eventually began to arise with their marriage. As a result, the two decided to divorce after seven years of living as husband and wife in 1998. Both moved on with their new partners as Dave found the love of his life, Angie Bautista, whereas Glenda tied the knot with her second husband, Chris Baker in 2014.

Following the divorce from Glenda, Dave Bautista started dating Angie Bautista. It's not known how they first met, but they shared incredible chemistry, which led them to marriage. Well, the lovebirds walked the aisle on October 13, 1998. At the time, he was at the peak of his wrestling career, winning many world titles in WWE. 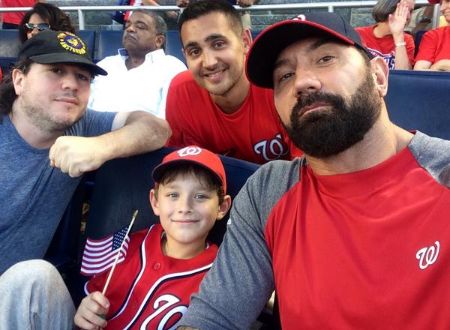 Unfortunately, his second marriage also ended in divorce in 2006. Dave is also the father of a son named Oliver Bautista, born in 2007. Oliver was, infact, born through the in-vitro fertilization method. After parting ways, Dave never spoke about her anywhere in the media but stayed quite close with his son Oliver.

Dave's former wife, Angie, was diagnosed with ovarian cancer. It was first diagnosed in September of 2002. She took medicinal drugs like Taxol & Carboplatin. As a caring husband, Dave raised funds for Angie's treatment & also for Ovarian Cancer Research Alliance. But after their split, Angie kept her life private.

After two failed marriages, Dave Bautista went on to marry for the third time to a much younger stunning woman. This time, it was with the beautiful former professional pole dancer Sarah Jade. Sarah is indeed a winner of the Miss Pole Dance America, 2016. 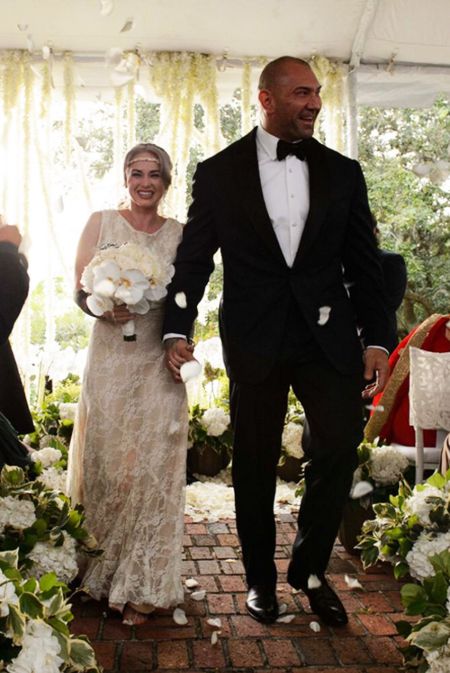 Dave Bautista during the wedding with Sarah Jade in 2015. SOURCE: Pinterest

In addition, Bautista and Jade walked down the aisle in 2015. It seemed like Dave has found a perfect match that would last forever. But it was not the case. Their marriage was short-lived; just after four years, they got divorced in 2019.

Moreover, in November 2019, Dave announced himself as a single on his Twitter account. Nevertheless, Dave never fell shorts of love as he was also rumored to have dated WWE woman wrestler Dana Brooke. Currently, Dave seems to be single without any partner.

How Rich is Dave Bautista?

Dave Bautista is one of the most prolific mixed martial artists and actors of all time. Dave first began his professional wrestling career with WWF in 2000, and WWE has televised him since 2002. During his fights, he got the victory against John Cena, Triple H, Rey Mysterio, and The Undertaker, to name a few of his opponents.

Watch the trailer of Bushwick 2 starring Dave Bautista below.

From 2013, Bautista appeared less and eventually quit the show for almost five years. He made a comeback in 2018 and permanently retired in 2019. Speaking of his acting career, Dave is equally successful in it, too, with acting credits in the movies like Guardian of Galaxy, Spectr, Mr.Hinx, and Blade Runner 2049. His fans loved him in the role in Avenger: Infinity War and Marvel End Game which boosted his fame.

According to Celebrity Net Worth, Dave has summoned a whopping net worth of $16 million. Thanks to Dave's lifelong involvement in acting and professional wrestling. Further, his wealth could increase with his upcoming movies Dune, Thunder, and many other projects in the future. All in all, Dave lives a lavish life without any sorts of problems.

Angie Bautista is the second wife of Dave Bautista. She is the mother of a son named Oliver Bautista.

Angie Bautista is the second wife of Dave Bautista. She is the mother of a son named Oliver Bautista.

Kelilani Bautista is the first daughter of Dave Bautista and Glenda Bautista, born in 1990.

Athena Bautista is the second daughter born from Dave Bautista and Glenda Bautista, born in 1992.

Oliver Bautista is the son born to Angie Bautista and Dave Bautista through in-vitro fertilization.