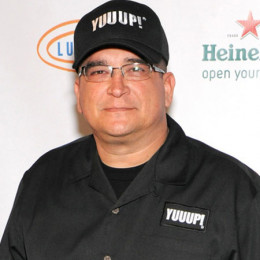 Famously known for working in reality television show Storage Wars, Dave Hester is an American auctioneer mostly recognized as The Mogul. The television personality is also famous for his bold personality.

Dave Hester is currently married to Donna Hester. The pair shared the wedding vows in a private ceremony among their close friends and relatives. The well-known star prefers to keep the information about his wife within him.

As of now, the Storage War reality show celebrity seems to have a good bond with his wife as there is no rumor for their divorce in media.

The couple is the blessed parents of their one son Dave Hester Jr. Dave and his son also share a good bond and Dave even featured his son in the show Storage wars a couple of times.

Dave fell in a controversy when he was eliminated by the producers of the show Storage War. He later filed a lawsuit against A&E saying he was fired without any formal process. Next, the appeal of him solved in the year 2014 and he joined the show again in the same year.

What is the Net Worth of Dave Hester?

Dave Hester possessed an estimated net worth of $4 million in 2019 but in April 2020 his wealth is doubled by $2 million that makes a total of $6 million.

The television star collected the sum by working in buy and sell valuables at actions. Moreover, the average salary of an auctioneer is $50,444 per year.

Hester used to go on at auctions with his father from the early age of five from where he grabbed the idea of the business. He officially started to buy machinery items and tools from actions at the age of 14. At that time used to sell those items to military-base shops in Orange Country, California.

Prior to visiting his first auction in 1986, Hester owned the Rags to Riches thrift store in Costa Mesa, California. Dave owned a Newport Consignment Gallery. In 1990, Dave served as a bid-catcher and later he became famous for using catchprase "YUUUP". In the same vein, Hester became a bonded and licenced auctioneer in 1992.

Dave sold out the collection of antiques and collectibles of his father and started his own two shops named Newport Consignment Gallery and the Rags to Riches thrift Store in Costa Mesa, California.

He hired above 15 employees to sell the items which he buys from the auction. Furthermore, his most valuable finding until now is the painting of Jack Wilkinson Smith named The Golden Pool'. He sold the painting for $155,000 after buying it at $750.

Hester later in 2010 appeared as one of the main casts of A&E Network reality series entitled Storage Wars. Moreover, the programme is the most watched program in the history of the A&E television series.

Dave Hester is currently married to Donna Hester. The pair shared the wedding vows in a private ceremony among their close friends and relatives.

Dave Hester and his wife Donna Hester are the proud parents of their only son Dave Hester Jr.