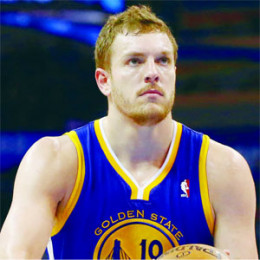 American basketball player, David Lee is a former professional basketball player who became a two-time All-Star and an All-NBA Team member and won the NBA championship in 2015. Previously, he played for the Florida Gators in a college basketball team before the 2005 NBA draft. Caroline Wozniacki, a Danish tennis player, is his fiance since November 2017.

Born to American parents, David Lee is a popular basketball player. He was born on March 8, 1982, in St. Louis, Missouri. He is an American by nationality and is of North American ethnicity. He follows Christianity.

Lee joined John Burroughs School for his middle school and later completed his high schooling at the  Chaminade College Preparatory School in St. Louis suburbs. He is left-handed, but after breaking his left arm, he learned to play right hand. In 2001, he won the Slam Dunk competition and was a McDonald's All American.

Lee gained an athletic scholarship from the University of Florida in Gainesville, Florida and played under coach Billy Donovan's Florida Gators basketball team from 2001 to 2005. In 2002, he was named as SEC freshman team by the conference's coaches.

David Lee started his professional basketball career in 2005 when he was selected by the Knicks in the NBA draft and signed a contract of five years with the team. He played 67 games with New York Knicks and averaged 5.1 points and 4.5 rebounds.

He started the year 2006 with the game against Chicago Bulls. The same year he faced many injuries including an ankle injury and severe sprain because of which he was unable to play the games. In the 2007–08 season, Lee was one of the strong players to contribute off the bench for the Knicks.

In February 2009, he was chosen to represent the East team at the 2010 NBA All-Star Game and became the first Knick's player to make the All-Star team. The same year, he recorded the first triple-double of his career against the Golden State Warriors. During 2009 and 2010 he recorded career highs in points per game as well as assists per game.

In 2010, he signed a contract with Golden State Warriors. The following year, he has appeared in 73 games. In 2012, he set the record of his second triple-double and averaged over 20 points per game in his 2011-12 season. He was listed to 2013 NBA All-Star Game for the reserve representing the Western Conference.

On February 2014, he ended his double-digit scoring streak at 123 games with 8 points. Lee won his first NBA championship with the Warriors in 2015.

Lee made his debut in Boston Celtics in 2015, but after a year he was waived from the team. After departing from Celtics, he signed a contract with Dallas Mavericks in 2016, and after playing for six months, he shifted to San Antonio Spurs. On November 19, 2017, he announced his retirement from basketball at the age of 34.

Lee isn't limited to sports only; he explored the television industry too. In 2007, he appeared on the game show, Family Feud during the NBA players vs. Mothers week to raise fund for charity.

In 2009, he was seen in the NBC's Celebrity Apprentice and made a cameo in the episode of the now-canceled series Lipstick Jungle. The same year, he made his movie debut with When in Rome in a minor role and also appeared in the 2009 version of The Electric Company.

David Lee got engaged to his longtime girlfriend, Caroline Wozniacki on November 2, 2017. The duo announced their engagement through their Instagram post. Lee shared a beautiful picture with Wozniacki and captioned it,

"She said YES! So thrilled to be engaged to my soulmate!"

The couple is dating since 2016, but they confirmed their relationship earlier in 2017 on the occasion of valentines day through their social sites.

The pair shares a healthy relationship with one another, and soon they are going to tie the knot, but they haven't confirmed the exact date of their marriage.

In 2010, Lee signed a contract of $79.54 million over six years, an average of $13.3 million per year with Golden State Warriors. He also owns many properties and gadgets, though he hasn't revealed the exact things and price, as per some online sources it cost millions of dollars.