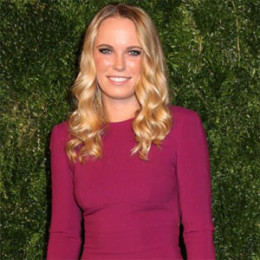 Caroline Wozniacki, 27, is a Danish professional tennis player. She is the first woman from a Scandinavian country to hold the top ranking position and 20th overall. In 2009, she reached the finals of 2009 US Open and then the semifinals in the 2011 Australian Open. Wozniacki finished in 3rd place in the world rank in 2017 after reaching the Tour-high 8 singles finals and winning her 26th and 27th Tour titles. She also ranked number 1 on the WTA tour and held the position for 67 weeks.

Caroline Wozniacki was born on 11 July 1990, Odense, Denmark to Piotr Wozniacki and Anna Wozniacka. Her parents were Polish immigrants, they moved to Denmark in 1909 when  Piotr signed for the Danish football club Boldklubben.

Regarding her nationality, she is Danish and is of White ethnicity. Wozniacki was raised along with his brother, Patrik Wozniacki who is a professional footballer played for  IF Skjold Birkerød. She fluently speaks, Danish, English, Russian and Polish.

Her father is her first coach since she was 14 and later she got trained by Sven Groeneveld. She then was coached by Ricardo Sanchez, Thomas Johansson for a short period.

Caroline Wozniacki is active in tennis since her early days. In 2005 she won several junior tournaments like;  Orange Bowl tennis championship. The same year, she debuted in WTA Tour at Cincinnati's Western & Southern Financial Group Women's Open. In 2006, she won the Wimbledon girls' singles title and many other reputed matches.

In 2007, she won a  $75,000 ITF singles title and made her Tier I debut with wildcard entry for the  Pacific Life Open. The following year, she won her first WTA Tour title at the  Nordic Light Open and subsequently won other two WTA tiles also.

At the 2009 U.S. Open, Wozniacki reached the final but failed to win the title. However, her excellent performance in 2009 helped to qualify her for the year-end Sony Ericsson Championships in Doha for the first time.

In 2010, she ranked world's number 1 female tennis player after advancing to the semifinals of the 2010 U.S. Open. She also became the first Danish player to ascend at the top of the world rankings.

Wozniacki lost with Li Na in the semifinals of Australian Open 2011, but she won other titles like WTA Championships and ended the year with world No. 1 tennis player for the second consecutive year. The year 2012 wasn't fruitful for her as she failed to win all matches of that time, but she made a great comeback in 2013 and won BGL Luxembourg Open. She qualified for the  WTA Tournament of Champions, but she chose not to participate and finished the year with ranked world no.1.

On October 2, 2014, she qualified for the  WTA Final and won a match against Maria Sharapova in three sets but she lost to Serena Williams in semifinals. The same year, she ran the  New York City Marathon and recorded a time of 3 hours, 26 minutes and 33 seconds.

The year 2015-16 wasn't the year for Wozniacki as she suffered from several illness and injuries.She even dropped from the World Top 10 rank and ended the year at no.19.

In 2017, she won the title of WTA Finals beating Elina Svitolina for the first time after losing to her twice in finals in straight sets. With the virtue of her WTA Finals crown, she jumped from world no. 19 to world no. 3 in 2017. However, she would be counted as world no. 1 player using the ATP ranking system.

Caroline Wozniacki became an endorser in 2009 for the line of tennis apparel designed by Stella McCartney for Adidas. In 2009 US Open she wore her first  'Adidas by Stella McCartney' tennis dress. She also has partnership agreements with Babolat, Rolex, Adidas, USANA, The Players' Tribune and Mundipharma.

In 2010, Wozniacki signed a three-year contract deal to endorse Turkish Airlines' business class service. She also endorses many brands like; Compeed BlisterPatch, Godiva Chocolatier and many other.

As per the June 2011 edition of SportsPro, she is the world's ninth most marketable athlete. In 2015, Wozniacki appeared in the  Sports Illustrated Swimsuit Issue.

Caroline Wozniacki recently got engaged to her longtime boyfriend, David Lee, a former NBA champion, on November 2, 2017. She announced this news through her Instagram posting the engagement ring and captioning with,

"Happiest day of my life yesterday saying yes to my soulmate"

The duo dated for a long time but made her relationship public on the valentines day on February 14, 2017, through her social media accounts.

Priorly, she was dating Northern Irish professional golfer Rory Mcllroy. The duo ended their three years relationship in 2014 at mutual understanding. Wozniacki also announced her engagement on her Twitter page, but it didn't happen. Mcllroy took all the blame for his unsuccessful relationship with Wozniacki as he said,

"The problem is mine. The wedding invitations issued at the weekend made me realize that I wasn't ready for all that marriage entails. I wish Caroline all the happiness she deserves and thank her for the great times we've had."

Wozniacki is very close to her fellow Danish tennis player, Malou Ejdesgaard and regards her as her best friend. She also shared good bonds with Serena Williams, Agnieszka Radwanska and Angelique Kerber.

She is a huge fan of  Premier League team Liverpool, and in 2011 Qatar Ladies Open she wore a  Liverpool shirt signed by footballer Steven Gerrard to support her favorite team.

Caroline Wozniacki is one of the highest-earning athletes and considered as the second highest-earning female athlete in the world in 2011 by Forbes. Wozniacki's net worth is estimated to be $20 million, while some online sources have mentioned the figures but official confirmation has come about it.

Wozniacki is quite interested in owning property also. In May 2014, she bought the Fisher Island home in Miami Beach costing around $1.7 million. She gets a handsome sum for her endorsement to various reputed brands as well as she charged impressive amount for her cover shoot.