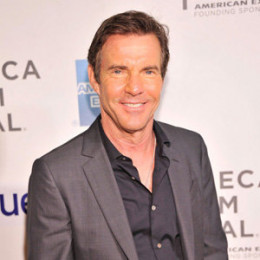 An American actor, Dennis Quaid is currently relationship with model Santa Auzina since 2016. He was born to parents of Juanita B. "Nita" Quaid, a real estate agent, and William Rudy Quaid, an electrician. Dennis attended Pershing Jr. High School in Houston, Texas. He started to gain notice when he appeared in Breaking Away and earned strong reviews for his role in "The Right Stuff". Quaid is also a musician, and plays with his band, "The Sharks".

Dennis Quaid was previously married to P. J. Soles from 1978 to 1983, Meg Ryan from 1991 to 2001 and Kimberly Buffington from 2004 to 2016. He was also engaged to actress Lea Thompson (1984 - 1987). Dennis Quaid also dated very shortly actress Anna Poche, Cynthia Garrett, Shanna Moakler and Andie MacDowell. He is the father of two sons named Jack and Thomas and a daughter named Zoe.

Dennis Quaid was born on 9th April 1954, in Houston, Texas. His parents are Juanita Quaid and William Quaid. Quaid’s mother worked as a real estate agent, and his father was an electrician.

Quaid has one sibling, an older brother named Randy Quaid, who is also an actor and is best known for his role in Independence Day. Quaid went to study at the University of Houston but would drop out to move to Hollywood and try to make a living as an actor.

Dennis Quaid made his debut with the film Crazy Mama (1975) playing the role of Bellhop. However, he first gained widespread attention in the 1980s.

For his role in Far from Heaven (2002), Dennis won the New York Film Critics Circle Award for Best Supporting Actor among other accolades.

Quaid has been married three times and has three children. Quaid married his first wife, an actress named P. J. Soles, on 25th November 1978. The couple divorced in 1983.

The actor then fell in love with actress Meg Ryan while filming D.O.A. The duo tied the knot on 14 February 1991. They welcomed a son named Jack Henry a year after on 24 April 1992.

Quaid and Ryan filed for divorce in June 2000 citing irreconcilable differences, and it was finalized in July 2001.

Buffington filed for divorce in March 2012 stating that the marriage had "become insupportable because of discord or conflict of personalities".

With repeated ups and downs, the pair filed for divorce the second time in 2016. Sources say that Buffington will receive $2 million as full payment and $13,750 a month for child support. The amount may go up if the star makes more than $1.3 million a year.

The couple officially divorced in 2018 with joint physical custody. The estranged couple will split the sale price of their family home while the actor will keep their home in Texas.

Quaid is keeping most of the cars a Land Rover, Mercedes, and Honda while his ex-wife will keep the 2014 Mercedes.

Meanwhile, Quaid is dating model Santa Auzina since 2016. Santa and Dennis made their red carpet debut as a pair in October 2016, at the MIPCOM opening party in Cannes.

Also, see: Full details of Dennis Quaid's relationship status as well as his past affairs

Dennis Quaid's net worth is estimated to be $40 million. His source of income includes his salary and earnings from his career as an actor. His notable movies I Can Only Imagine, A Dog's Purpose, Footloose, and G. I, Joe: The Rise of Cobra made gross collections of $83 million, $64 million, $51 million, and $150 million, respectively.

Dennis Quaid was previously married to P.J. Soles in the year 1978 but they did not continue their marriage relationship and divorced in 1983.

After divorce with his first wife, he married to actress Meg Ryan in 1991 but their marriage relationship ended in the year 2001

He married to actress Kimberly Buffington in 2004 but they divorced in the year 2016. She is the third wife of him.

Jack Henry Quaid is an American actor. He is best known for portraying Marvel in the 2012 science fiction film The Hunger Games.

Thomas was born on November 8, 2007.He has one elder brother and one sister.

Zoe Grace Quaid has two brothers and very few details about her on social sites.