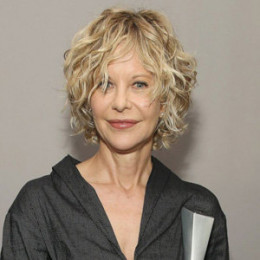 An American Actress, Director, and Producer, Meg Ryan is currently single. She was previously married to Dennis Quaid from 1991 to 2001. She was born to parents of Susan Jordan, a former assistant casting director, and Harry Hyra, a math teacher. Meg Ryan graduated from Bethel High School in 1979. While at NYU, she acted in TV commercials. Meg Ryan starred in several romantic comedies, including Sleepless in Seattle. In 1997, she appeared in Addicted to Love and in 1998, she appeared in You've Got Mail.

"The Rich and Famous" actress is officially a married and divorced woman. Or even better, she breaks headlines for her romantic affairs with big names of the industry.

Well, some of Meg's affair had almost instantly ended her career. What is her current relationship status? Is she married to or dating someone?

French Kiss star is currently in a live-in together relationship with lover turned fiance, John Mellencamp. The pair rekindled their relationship in early 2010.

The actress announced her engagement to American musician on November 8, 2018. The 57-year-old cleared about her engagement during InStyle's 25th-anniversary special.

Ryan will get married at some point but for now, this engagement thing is a state of grace for her.  Instead of focusing on her love life, the starlet said she's prioritizing her kid's happiness.

Ryan isn't in a rush to walk down the aisle with Mellencamp. In case, she weds the Rocker it will be the second marriage for her and the fourth for John.

Ryan married actor Dennis Quaid on February 14, 1991. They met on the set of Innerspace. The pair showed affection to one another during the shooting for the second film together titled D.O.A.

After 10 years together, the couple divorced on July 16, 2001. There were rumors of Ryan cheating on Dennis with Russell Crowe, cited as one of the reasons for their divorce.

After officially separating from Quaid, Meg had a brief romance with actor Russell Crowe. Meg Ryan later revealed Quaid had been unfaithful to her for a long time. Crowe's once rumored of having an affair with Sophia Forrest and Peta Wilson.

The blonde-haired met Crowe while filming Proof of Life in the 2000s. Following year, they went public as a pair right after Meg split from her husband of nine years, Dennis Quaid. In January 2006, Ryan adopted a 14-month-old girl from China whom she named Daisy True.

Meg Ryan's estimated net worth is $45 million. Her source of income includes her salary and earnings from her career as an actress, director, and producer.

Meg lives in Los Angeles, California where she owns a house worth $8.5 million. Moreover, her Martha Vineyard House is estimated to be worth millions. She also owns Mercedes R350 as her private ride worth around $52,000-53,000.

Ryan began her acting career in 1981 in minor roles, before joining the cast of the CBS soap opera As the World Turns in 1982. Her performance in the Rob Reiner-directed romantic comedy When Harry Met Sally... (1989) brought her widespread attention and her first Golden Globe nomination.

Ryan subsequently established herself, both nationally and internationally, as one of the most successful actresses in the 1990s and early 2000s, particularly in romantic comedy films such as Sleepless in Seattle (1993), French Kiss (1995), You've Got Mail (1998), and Kate & Leopold (2001).

Meg Ryan was born on November 19, 1961, in Fairfield, Connecticut. Her mother Susan Jordan was a former actress and English teacher, while her father Harry Hyra was a math teacher. Ryan attended St. Pius X Elementary School and was raised as Roman Catholic.

Meg has two sisters and a brother. When Ryan was 15, her parents divorced. After elementary school, Ryan went to study at Bethel High School. She studied journalism and later enrolled at the University of Connecticut and then, New York University.

Be sure to check out Marriedwiki.com for celebrity biographies

Meg Ryan was previously married to Dennis Quaid in 1991 But the couple did not continue their marriage relationship and divorced in 2001.

The couple welcomed their son Jack who was born in 1992.

She adopted a daughter named Daisy from China in 2006.