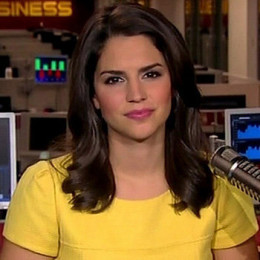 This person is an American news personality who is better known for working as an anchor for WCBS-TV in New York City. She is also a former editor for FoxNews.com. She also used to work as on air reporter for the Fox Business Network. Besides anchoring she is also lead singer of musical ensemble called "Tribeca Rhythm". She holds double major of political science and communications from Boston College. At starting she started her career as guest booker for Fox News Radio. She used to co-host Fox News Channel program Red Eye with Greg Gutfeld.

Diane Macedo was born on 28 February 1982 in Mineola, New York. Her parents were immigrants from the Minho region of Portugal.

She studied at Boston College and completed a political science and communications double major.

Macedo started her professional career as a guest booker for Fox News Radio. She worked on the Fox Business Network reading business news during Imus in the Morning from 2011 to 2013.

So happy for you & proud of you, @kendisgibson. Does this mean I have to finally stop calling you my work husband? https://t.co/BWQkoZpAS3

Macedo has an estimated net worth of about $1 million as of January 2019.

Accounting her personal life she is already married to her longtime boyfriend Thomas Morgan. The couple was engaged with each other in 2012 and after a year they got married. Beside him, there is no record of her dating anyone.

Since she has not involved herself in extra-marital affairs, there is likely very less chance of getting a divorce in near future.

BABY ALERT: Thrilled to announce my husband and I are expecting our first child!  pic.twitter.com/5WzuaZtQAq

Well, the family of three seems so happy and healthy.

Thanksgiving weekend gave us a lot to be thankful for. Our little boy is here! Thank you all for the love and good wishes. (swipe for more)

The couple welcomed their first baby boy in November 2018.

2018 brought some of the hardest challenges I’ve ever faced and also the greatest joy I could ever ask for. Here’s to 2019 and all it has in store. Happy New Year everyone!

The new mom celebrated 'New Year 2019' with her husband and a new member in the family.

After getting engaged in December 12, 2012, couple got married a year later. Together they are leading very happy married life.