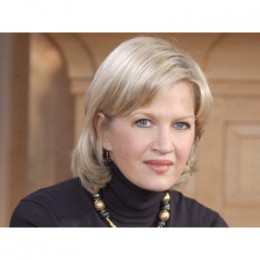 Diane Sawyer, ABC World News anchor is not involved in a  marital relationship nor dating after the demise of her beau, Nichols. She's retired from her career and spending quality time with her estranged children.

Diane Sawyer, a 73-year-old widow of Mike Nichols with whom she married on 29 April 1988 in an intimate ceremony. They first met in 1986 in a lounge at Charles De Gaulle Airport in Paris, France.

Sadly, after living together for twenty-six years as a life partner, Nichols died on 19 November 2014. Mike lost his life due to the heart attack at his own home in Manhattan,

Sawyer and Nichols didn't have any children of their own but her husband fathered two daughters and a son from his previous relationship.

Previously, she has been involved in a number of romantic affairs with Warren Beatty. She was in a relationship with Frank Gannon, an aide to President Richard Nixon, a.w.a an American diplomat Richard Holbrooke.

How Rich Is Diane Sawyer?

The ABC News anchor is under the list if the World's 100 Most powerful women by Forbes Magazine between June 2005 to 2008. She made approximately $12 million only from entertainment income. Diane received a salary of $12,000,000 per year for her work in Good Morning America in 2007.

Diane Sawyer has remained a trailblazer for the female journalists and one of the well established and familiar faces in news. Her U.S. interview with Malala Yousafzai, a 15-year-old schoolgirl from Pakistan shot by the Taliban in 2012 was acclaimed by many.

Similarly, in May of 2019, the blue-eyed announced that "ABC World News with Diane Sawyer was in the midst of its highest-watched season within two years.

Sawyer and her late husband, Mike Nichols shared a beautiful Pallisades Home till 2014. She put the house on the market for $4.6 million in November 2016. The French country-style house was built and designed in the 1920s. The idyllic 1.9-acre real estate displays a scene from Provence with manicured gardens, winding pathways, and stone steps.

Diane's spouse, Nichols was an American film and theatre director, producer, comedian and actor. He left $20 million net worth to his partner Sawyer and three children.

Diane Sawyer was born as Lila Diane Sawyer on December 22, 1945, in Glasgow, Kentucky, U.S. Her mother, Jean W. (née Dunagan) is an elementary school teacher, and her father, Erbon Powers "Tom" Sawyer is a judge. Sawyer is of English, Irish, Scots-Irish, and German. Her family moved to Louisville soon after her birth.

Diane joined the  Seneca High School in the Buechel area of Louisville and graduated from Wellesley College with a degree in Bachelor of Arts degree in English. She used to work as editor-in-chief for her school newspaper, The Arrow and participated in several artistic activities.

He died recently at the age of 83. The couple have no any children. He has two daughters and a son from his previous marriages.