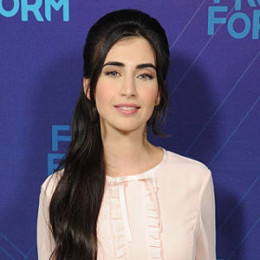 Dilan Gwyn is an American actress. Her father, Orhan Kotan is a Kurdish writer, journalist and a poet. She is involved in dance training from her school years. She is best known for her role as Willa in the Freedom series Beyond. She was also featured in a recurring part on Da Vinci's Demons.

Dilan has a green belt in Karate and can also play Indoor Hockey. She went to study film at Stockholm University as she was interested in movies. As like other actor/actress she has also moved to American, here she attended The A.A.D.A in both L.A New York City.

At present, Dilan lives in London but works in Hollywood movies. She has appeared in Da Vinci’s Demons which is a BBC World Wide Production series. She has also worked in a Finnish movie named K7.

Her breakthrough was in the movie Dracula Untold under Universal Picture. Dilan is working for the upcoming series titled "Beyond," in which she plays the character of Willa. She has also appeared in a couple of movies, short movies, television and also on stage.

Talking about Dilan personal life, it seems that she is quite secretive when it comes to her life. Detailed information is not available regarding her boyfriend, affairs, or relationship status. Though being one of the actresses, and with media attention, she has successfully kept her personal life.

She posted an Instagram video of movie clips where the couple shares a passionate kiss on Valentine's Day 2019.

Hot and fresh from the editing room, in honour of Valentine's Day, here is a love filled sneak peak of "Älska Mig" = "Love Me? #Repost @jbornebusch #ÄlskaMig #ViaplaySverige #FilmCapitalStockholm #Warnerbros

It seems that likes to keep her personal and professional life separate. There is no news on seeing her with anyone, therefore it is assumed that she is single to this time.

Dilan Gwyn was born on 4 June 1994 in Stockholm, Sweden under birth sign Gemini.

She attended the University of Sorbonne in Paris to study French. Later, she joined Stockholm University before heading to The American Academy of Dramatic Arts.