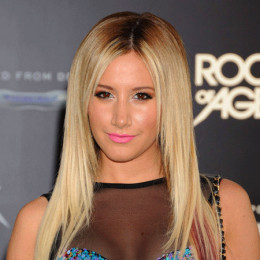 Ashley Michelle Tisdale is an actress, producer and singer, best known for her 2007 gold-certified album 'Headstrong'. She is also recognized for her role on Disney's 'The Suite Life of Zack and Cody', as Maddie. For her performances in the High School Musical series, she received an MTV Movie Award. In 2008, she was placed in the 10th position on the Maxim magazine Hot 100 list.

Moving on to Ashley Tisdale's personal life, she now is a married woman. As of date,she has been married only once and she has been enjoying her marital relation with her husband Christopher French since 2014.

They don't have any kids yet. Before that, she had been through lots of romantic dates and breakups and also was romantically linked with some of the Hollywood stars. To be updated and to observe her closely, one can follow her on twitter @ashleytisdale.

Happy Valentine’s Day to the love of my life @ashleytisdale

She celebrated Valentine's Day 2019 and shared an image of the duo sharing passionate kiss. She mentioned that she is the luckiest girl to have him as his soulmate.

Ashley Tisdale and Christopher French sharing a passionate kiss.
The above image captioned,

"I’m still trying to figure out how I got to be your forever valentine. But I think it was the moment I chose to love myself that you came into my life. Happy Valentines Day @cmfrench I’m the luckiest girl."

She rose to fame playing the role of Maddie Fitzpatrick in the Disney Channel series The Suite Like of Zack & Cody.

He is a recording artist, and producer, best known as the founder and lead singer of a rock band 'Annie Automatic'. They have known each other from 2012.