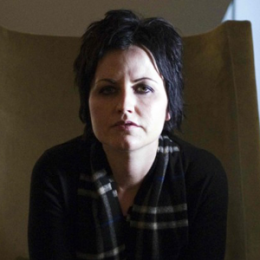 Dolores O'Riordan was an Irish singer-songwriter, and musician, well known as the frontwoman of the popular rock band, The Cranberries. O'Riordan was active with the band for thirteen years. The band's popular singles include Zombie, Ode To Family, When You're Gone and Linger among others. O'Riordan also had a solo career, she died on 15th January 2018.

O'Riordan was the youngest of seven children born to her parents. O'Riordian studied at Laurel Hill Colaiste FCJ school based in Limerick. She was also an Honorary Parton of University Philosophical.

O'Riordan was raised as Roman Catholic, her mother was a Catholic who named her daughter to the Lady of the Seven Dolours. She is of Caucasian ethnicity and holds Irish nationality.

In 1990, Dolores O'Riordan auditioned and won the role of the lead singer for the band The Cranberry Saw Us (currently known as The Cranberries) replacing Niall Quinn.

The band has released five albums, No Need to Argue, Everybody Else is Doing It, So Why Can't We?, To the Faithful Departed, Wake Up and Smell the Coffee, and Bury the Hatchet.

The Cranberries also released an album with a compilation of their greatest hits named Stars: The Best of 1992-2002. The band took a break in 2003. Some of the band's biggest hits include Zombies, Dreams, Linger, Ode to my Family and Promises. They have sold over 40 million records worldwide.

Dolores O'Riordan is also known as a style icon, mostly for her buzzed/ pixie haircut in the '90s.

On 25th August 2009, O'Riordan promoted her solo album No Baggage in New York City. During the time, she announced that The Cranberries would reunite for a world tour. The tour started in North America followed by South America and Europe.

The band played most of The Cranberries' hits, some new songs they were working on and few songs from O'Riordan's single album.

In 2004, O'Riordan made her appearance with Zucchero, an Italian artist, on the song Pure Love in the album Zu & Co. The album also featured other singers  Luciano Pavarotti, John Lee Hooker, Sting, Macy Gray, Sheryl Crow, and Eric Clapton.

The same year, O'Riordan also collaborated with the famous composer, Angelo Badalamenti on the song Evilenko. In 2005, O'Riordan was credited as the guest vocalist on the Jam & Spoon's album Diplomatic Fairytales 3003 on the song Mirror lover.

O'Riordan made a cameo appearance in the comedy flick by Adam Sandler named Click. She portrayed the character of a wedding singer performing an alternate version of the song Linger by The Cranberries.

Her first single Ordinary Day was produced by the winner of BRIT Awards, Youth, who has also worked for Embrace, U2, The Verve, Primal Scream, and Paul McCartney.

Dolores O'Riordan's first solo album, Are You Listening was released on 4 May 2007 in the Republic of Ireland. The album's first song Ordinary Day was shot in Prague.

On 19 November 2007, O'Riordan canceled her European Tour due to some illness. The next month, she performed in a few American clubs like Nashville, and Des Moines.

O'Riordan's second album No Baggage was released in August 2009. The album featured 11 tracks. She won EBBA Award in 2008. O'Riordan also appeared as a judge on RTÉ's The Voice of Ireland during the 2013–14 season.

O'Riordan lived in Howth County Dublin with her husband and children. The pair used to spend summers in a log cabin in Buckhorn, Ontario Canada. Later they permanently moved to Buckhorn. She returned to Ireland in 2013.

The couple stayed in a relationship for twenty years and divorced in 2014. Their kids lived with Burton after the divorce.

In November 2014, Dolores O'Riordan was charged and arrested for an air rage during a flight from NYC to Shannon. At the flight, O'Riordan got physically and verbally abusive with the crew.

When police were about to arrest her right after the landing, she refused and reminded them her taxes paid their wages and shouted ''I'm the Queen of Limerick! I'm an icon!'', spitting at one Garda officer and then another.

Later, O'Riordan explained the media that she had been stressed out staying in New York hotels, following the end of her long-term marriage. When the judge headed her case, he agreed to clear all the charges if O'Riordan will make an apology in writing to those she harmed and contributed €6,000 to the court poor box.

According to some sources, O'Riordan also went to a psychiatrist very frequently, due to excessive work and stress she was going through.

In May 2017, Dolores O'Riordan publicly talked about her bipolar disorder, which she had been diagnosed with two years ago. The Cranberries said, due to her back problems they had to cancel the second part of their European tour. In late 2017, O'Riordan said she was recovering and also performed at a private event.

The Cranberries lead singer Dolores O'Riordan died at the age of forty-six on January 15, 2018. She was in London, England, for a recording session when she unexpectedly died at the Mayfair hotel, London Hilton on Park Lane. Meanwhile, the reason behind her death is still unknown.

Irish president Michael D. Higgins was the first to pay tribute to the late singer. Other tributes from the music world included Kodaline, Hozier, and Dave Davies.

Dolores O'Riordan made a good amount of money from her successful career as a singer and songwriter, her net worth was $25 million. O'Riordan released five albums with The Cranberries.

She also released many singles as a solo artist. She earned $5 million annually from her musical career. In 2006, she listed in the top 10 wealthiest women in Ireland.

O'Riordan's song Zombie was one of her greatest hits that earned the title of Best Song at the 1995 MTV Europe Awards.

O'Riordan also owned two luxury houses in Ireland worth $6.5 million. She purchased few luxury cars too. According to some sources, she had six luxury cars including Bentley($620,000).

The couple was married on July 18, 1994. They both stayed together for twenty years and shared three children together. They divorced in 2004.

Molly Leigh Burton is the second child of the couple.

She is the third child of the couple.