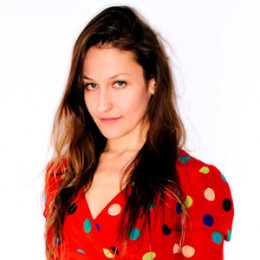 English-American singer, Domino Kirke founded her own doula business called Carriage House Doulas. After being spotted at a Joe's Pub performance at the age of seventeen by producer Andre Levins she was signed to his label, 'Fun Machine'. Domino was trained musically by her father Simon Kirke, who is well known as the drummer for Free and Bad Company.

Domino Kirke was born in London in 1983 and grew up in Manhattan after spending her early years in England. She holds American nationality with English and Iraqi-Jewish ancestry.

She is a daughter of Simon Kirke, a rock drummer best known as a member of Free and Bad Company. Her mother Lorraine Kirke runs the Geminola boutique in SoHo. She grew up with her two actress siblings Lola Kirke and Jemima Kirke.

Kirke after being spotted at Joe's Pub performing at the age of seventeen by producer Andre Levins, she was signed to his label, 'Fun Machine.'

She joined forces with Jordan Galland and formed 'DOMINO,' this band recorded an EP with Mark Ronson and toured for three years with the likes of Gang of Four and Lily Allen.

Domino became a doula, a nonmedical person who assists a person before, during, or after childbirth around 2009 and founded her own doula business, Carriage House Doulas. She is the co-director of the company in NY/LA.

Kirke worked on a record with fellow musician, Luke Temple, of the band 'Here We Go Magic', and they released their project titled Independent Channel in May of 2015.

Domino Kirke started dating Penn Badgley actor and musician known for his role as Dan Humphrey on The CW's series Gossip Girl (2007–12) in 2014. The couple married on 27th February 2017 in a New York courthouse.

The couple wedded in a courtroom ceremony attended by close friends and family including her sisters, Jemima and Lola. Their wedding party was held at Brooklyn's Maison May Dekalb.

She has a son Cassius from her previous relationship.

The award winning singer Kirke's net worth is still under the curtains. But looking at her impressive career she must probably have a huge net worth. However, her husband Penn has an estimated worth of $8million.

In 2014, Domino Kirke began a relationship with Penn Badgley, actor and musician best known for his role as Dan Humphrey on The CW's series Gossip Girl (2007–12).