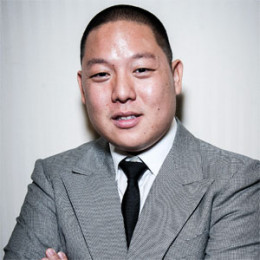 Edwyn Charles aka Eddie Huang is an American chef, restaurateur, producer, and author. He is also a famous television food personality in the United States. Huang hosted Huang's World for Viceland. He is known for his autobiography Fresh off the Boat: A Memoir which was adapted into a television series of the same name which was broadcast on ABC network back in 2015.

Eddie Huang was born on March 1st, 1982 in Washington, D.C., to parents Jessica Huang and Louis Huang. He was raised in Chinatown, Washington. Later, the family migrated to Orlando, Florida where his father worked as a manager in popular steak and seafood restaurant.

In 2004, Huang graduated from the University of Pittsburg and Rollins College completing B.A in English and Film from Rollins. At Rollins, he earned a Zora Neale Hurston and Barbara Lawrence Alfond English Award for the school paper, The Sandpur.

After graduation, his career shifted towards law practice as he worked as a President of Minority Law Students Association, followed by his vice presidency at Asian Pacific American Law Students Association. His official career started when he began working in Chadbourne and Parke, a well-respected law firm in New York City. He worked there for two years as a summer associate then after two years he was hired as an associate in Corporate Department. But due to the global economic crisis, he got fired from the firm.

Following the crisis, he decided to become self-employed and ran a streetwear company called Hoodman Clothing.  Huang co-created clothing design with the graphic designer and Art Director Ning Juang, whom he had met in Taiwan.

In the Lower East Side of Lower Manhattan, Huang opened his own restaurant and Taiwanese bun shop called BaoHaus in 2009 and two years later, he opened another restaurant named Xiao Ye but this was not successful and it eventually shut down.

Eddie Huang Shares His Favorite Memories of Prodigy + New Season of 'Huang's World' in the below video.

Recently, he hosted an American television documentary series Huang's World. The series is based on the concept of exploring identity using food as an equalizer.

Eddie Huang is living a luxurious life and he has an estimated of net worth of $2million. As per the sources his monthly income is $41,000 and annual salary is $500,000.

He has also written another book entitled, Double Cup Love: On the Trail of Family, Food and Broken Heart by China which is available in Kindle at $11.55 and F*ck, That's Delicious: An Annotated Guide to Eating Well by Action Bronson Hardcover costs $21.03. Millions of copies of these books have been sold worldwide.

In America, the approximate salary of hosts and announcers on cable and other subscription programming is $59,650. Hence, we can estimate salary of Eddie as show host is around $60 thousand.

Eddie Huang has not married yet. In 2013, he was engaged with his girlfriend Dena but the marriage was called off due to some reason. Recent news speculates that he is closer to Elle.com's Beauty Director Julie Schott and they could be an in a relationship, as the fact that he posted many photos of them together in social media.

In one of the photos with Julie, he was spotted having dinner and he captioned the photo with: "Double Date Night With @therealmamahuang @julie_schott." Hence, it's obvious that the Eddie is dating Julie Schott.

Growing up, Huang went through a terrible phase as he was sexually assaulted by the church chaperone when he was just 14 years old. The celebrity chef came forward with the experience through his column which was published last year in November where he wrote the entire story. When he was 14, took a church ski trip with a friend and during the trip, the church chaperone assaulted him standing naked reading the Bible. He wrote about the incident in his column for The Cut:

"I get knots in my stomach and blood rushes to my brain when I begin to write this. I think it's anger, but I'm not sure. More than anything, I just feel powerless to the memory. Him taking his time with the shower, steaming up the room, then coming out with his d--k hanging out."

The Chaperone then went inside the room and asked if he could take shower and came out naked, standing in front of him and his friend, and started reading the Bible out loud. He stated that he couldn't call for help or tell anyone about the incident, thinking that no one would believe him or his friend. He confessed how humiliated and frightened he felt when he had to go through the incident, although nothing happened. He shared that it still haunted him and the Harvey Weinstein and Kevin Spacey scandals encouraged him to share his story.

Eddie was named a 2013 TED Fellow but he canceled his TED fellowship for not attending every event of the conference.

During an interview in Real Time with Bill Maher, Eddie drew a lot of attention when he made offensive comments about black women. He had stated,

"I feel like Asian men have been emasculated so much in America that we're basically treated like Black women."

Later he got into a minor twitter exchange with a girl with Twitter account @BlackGirlDanger defending his comments where he justified his comments made about black women. Later, he tweeted, "are we dating cause you wildin, lol" and also requested to take her on a date.

Eddie had sketched his criticism for his appropriation of African-American culture. Talking about the importance of owning a culture he stated:

"I've devoted myself to speaking about people owning their own cultures that they've created, that they came over with, and educating people about the foundational values in the culture."

However, The New York Times introduced him as "a walking mixtape of postmodern cultural appropriation", but some complained that he presented "misogynistic language and attitude, non-conventional English speech and dress, and experience with police show an adoption of a hip-hop which affects persona."